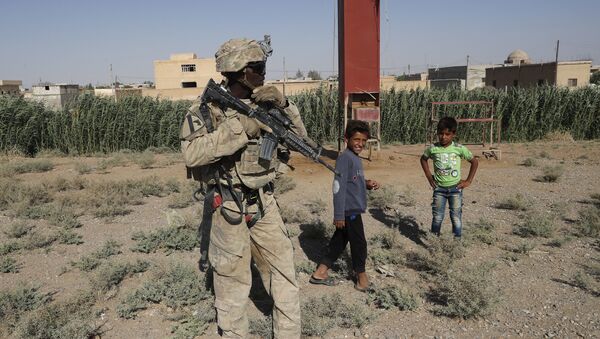 The recent military activities in the area have been purely theatrical, with the US manipulating both the SDF and Daesh like puppets. Washington's goal is to set up a Kurdish enclave there and settle into the area for the long term, Turkish and Russian military analysts told Sputnik.

On Friday, the Syrian Democratic Forces (SDF), with the support of the US announced that they have fully cleared Raqqa from Daesh. The report has been confirmed by the US-led coalition.

Later reports revealed that SDF raised a flag with the portrait of Abdullah Ocalan, leader and one of the founding members of Kurdistan Workers' Party, (PKK), outlawed in Turkey.

Speaking to Sputnik Turkey, Turkish military analyst Koray Gurbuz, an expert at the Ankara-based Bilkent University and former chairman of Turkey's Council of Veterans, stressed that it only demonstrates the "falsity of US claims that there is no direct linkage between the Syrian Kurdish People’s Protection Units (YPG), the major comprising group of the SDF, and Turkey and Iraq-based PKK."

Raqqa's Liberation Marred By Reports That US Evacuated Daesh Leaders

Koray Gurbuz noted that the operation resembles more of a "puppet show with the US pulling the strings of both the SDF and Daesh."

"The US are making attempts to set up new order in the Middle East with the support of various terrorist organizations in Syria, such as Daesh and the Syrian affiliate of Kurdistan Workers' Party, Kurdish People’s Protection Units," he told Sputnik.

For this reason, the US supplies arms to both Daesh and YPG. No matter how hard the US tries to deny it, the facts speak for themselves, the military analyst explained. Thus Washington tries to clear the way for YPG and Barzani (President of the Iraqi Kurdistan Region) to set up a Kurdish corridor in the region.

After Daesh's Defeat in Raqqa, What Next for Syria and for the Kurds?
According to Koray Gurbuz, the people who now head Daesh spent many years in the Guantanamo Bay detention camp. However soon after their release, they set up this large terrorist organization and started their blood-drenched voyage to the Middle East with more arms than anyone else in the region had.

The expert further described the process of setting up a Kurdish corridor: first Daesh comes in and occupies certain territories. Then Iraqi Kurdish Peshmerga Forces, on the one side, and Syrian YPG on the other try to set up their own corridors. Similar practices have been used in Raqqa. The US wants to open these corridors up to the Mediterranean Sea through the territories of Iraq and Syria.

This point of view is echoed by Russian military analyst and president of the Academy for Geopolitical Problems Konstantin Sivkov, who told Sputnik that the liberation of Raqqa means that the US has anchored its presence in the region and will try to destroy the territorial integrity of Syria and Iraq by creating a puppet Kurdish enclave.

The expert suggested that the US will further try to expand the zone of its influence to Deir ez-Zor and northeastern regions of Syria, which are rich in oil deposits. This will inevitably lead to serious diplomatic rows as any attempt by Syria and Iraq to preserve their territorial integrity will mean a loss of one of the zones under control of the US, which Washington will try to prevent, he concluded.