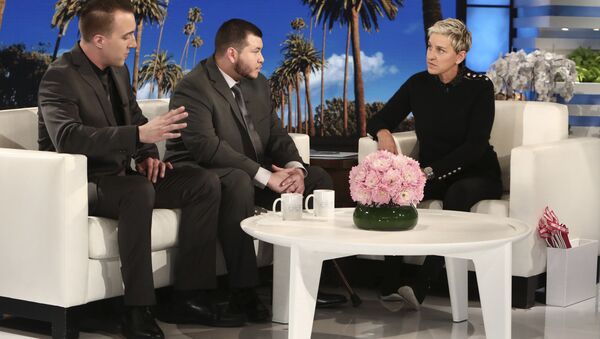 Jesus Campos, the security guard being called an “absolute hero” for notifying his dispatch immediately when Las Vegas shooter Stephen Paddock first opened fire from the 32nd floor of the Mandalay Bay Resort and Casino, made his first public appearance on “The Ellen DeGeneres Show.”

Campos, who abruptly disappeared after the shooting, even though he had interviews scheduled with multiple media outlets, first shared the details of his experience with Ellen on Tuesday.

According to Campos, he arrived on the 32nd floor of the hotel on October 1, the night of the shooting, to investigate a door that had been left open. He had called engineering for assistance with the door when he heard the sound of drilling from inside another room, which turned out to be Paddock's, and that of a heavy door slamming shut. That's when Paddock started firing through the shut hotel door, hitting Campos in the leg.

"I heard rapid fire, and at first I took cover," Campos said. "I felt a burning sensation. I went to go lift my pant leg up and I saw the blood. That's when I called it in on my radio that shots had been fired, and I was going to say that I was hit, but I got on my cellphone just to clear radio traffic so they could coordinate the rest of the call."

Moments later, maintenance worker Stephen Schuck arrived to help with the door and quickly got down when Campos told him to take cover.

"Within milliseconds, if he didn't say that, I would have been hit," Schuck, who appeared on Ellen with Campos, said, adding that his colleague had saved his life.

When a woman came out of her room nearby, Campos warned her to go back inside.

​"Really, he saved your life, and he saved also the woman who came out of the door to go into the hallway," DeGeneres said to Schuck.

Campos, who looked visibly emotional on the Ellen show, said that this would be his only public appearance on the shooting.

"Thank you so much for being here," DeGeneres said. "I know you've had so many people asking for you to tell the story and talk about this and I understand your reluctance because you just want this to be over."

"You're talking about it now and then you're not gonna talk about it again," DeGeneres added. "And I don't blame you, because to relive this over and over again… We just wanted to celebrate you."