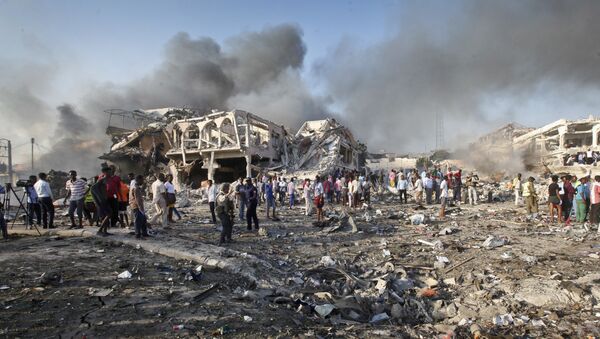 There’s no end in sight for the US troop deployment in Somalia.

The presence of US troops in Somalia has jumped since the start of 2017, the Pentagon said Monday, following the deadliest terror attack in the African nation’s history.

Over the past 10 months the number of US soldiers in Somalia has increased from 100 to 400 in total, a Pentagon spokesman told reporters in Washington Monday. It’s worth keeping a skeptical eye the Pentagon’s public statements on troop levels, however, since they have misrepresented these figures in the past. When Trump deployed regular US troops to Somalia in April, it was the first time since the disastrous 1993 Battle of Mogadishu that American soldiers had been stationed there.

Africa
Mogadishu Bombing: Al-Shabaab Is a 'Shadow Government' in Somalia

“We’re not going to speculate” about whether more soldiers or special operations forces will soon be headed to the east African nation, a Defense Department spokesman said, Stars and Stripes reports.

On Saturday, two trucks packed with explosives detonated in Somalia’s capital of Mogadishu, leaving at least 300 dead and wounding hundreds more, a Somali medical official told Reuters October 16. “The death tolls will still be higher because some people are missing,” the official noted.

Al-Shabaab, an extremist group linked to al-Qaeda, is widely suspected of having orchestrated the attack, Director of the Africa Research Institute Edward Paice told Sputnik News.

"To dismiss al-Shabaab as being just a bunch of disaffected youths or whatever is to completely miss the point,” the director told Sputnik. “What the aim of the group ultimately is is anybody’s guess,” Paice says. Their goal “is most likely to overthrow the [Somali] federal government.”

In May, the US Army’s 101st Airborne Division deployed to Somalia to provide training courses for the Somali National Army, US Africa Command reported.

The US Defense Department designated various parts of Somalia an “Area of Active Hostility” in March, Foreign Policy reported, and requested permission from US President Donald Trump to expand targeting authority “to prosecute targets in a more rapid fashion” via drone strikes, Gen. Thomas D. Waldhauser said at a March news conference.

“Regardless of what combatant commander was sitting here this afternoon, I think they would all tell you that it's very important and very helpful for us to have little more flexibility, a little bit more timeliness, in terms of decision-making process and it'll allow us to … counter [Daesh] or in our case in Somalia, al-Shabaab,” Waldhauser said.

According to the Bureau of Investigative Journalism, the US has conducted 16 air and drone strikes during its 2017 operations.