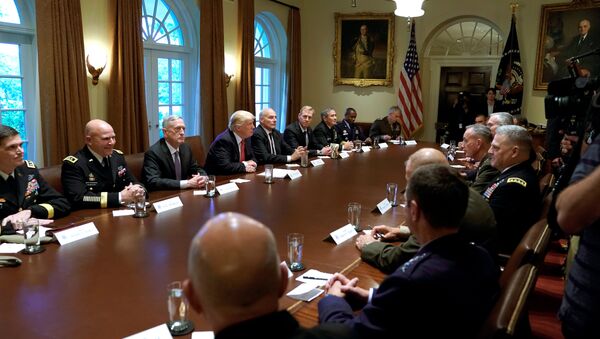 The Iran nuclear agreement won't automatically collapse if the US withdraws from the multilateral deal, Iran analyst Mahan Abedin told Radio Sputnik. However, one shouldn't underestimate Washington, since it could give EU member states an ultimatum seeking to ruin the accord, the expert said, assuming that the world is moving toward a new crisis.

"Even if [US President Donald Trump] invalidates the deal… this doesn't necessarily spell the end of the deal," Abedin emphasized.

The Washington Post reported Thursday citing White House sources that Trump may declare Iran noncompliant with the JCPOA and "decertify" the deal. Last week the US president signaled that Tehran "has not lived up to the spirit" of the nuclear accord and accused the latter of supporting terrorism and exporting "violence, bloodshed and chaos across the Middle East."

In accordance with the 2015 Iran Nuclear Agreement Review Act (INARA), the US administration has to certify its commitment to the deal every 90 days. The next deadline is October 15.

Abedin recalled that if the US president decertifies the agreement, Congress has 60 days to re-impose major sanctions against Iran.

Only when the restrictions come into force again, it will mean the US is out of the JCPOA, the expert noted, adding that "even then this is not necessarily the end of the deal."

World
German FM Says We Fear US' Signals Suggest Trump Will Reject Iran Nuclear Deal
Abedin drew attention to the fact that the 2015 nuclear agreement is a "multilateral" accord, which was concluded by the P5+1 (China, France, Germany, Russia, the United Kingdom and the United States), the European Union (EU) and Iran.

"Obviously, the US is the most important component of [the deal], but nevertheless even if the US is noncompliant with it and formally [exits the deal] it will not spell the end of the JCPOA," the expert said.

On Saturday, speaking at a ceremony at Tehran University, Iranian President Hassan Rouhani stated that the US president cannot undermine the deal.

"In the nuclear negotiations and agreement we reached issues and benefits that are not reversible. No one can turn that back, not Mr. Trump or anyone else," Rouhani said as quoted by Reuters.

The Iranian president underscored that the JCPOA serves the best interests of the US as well. Commenting on Rouhani's notion, Abedin suggested that if Washington withdraws from the deal and the old status quo is reinstated, the US would face not one, but two major nuclear crises — in North Korea and Iran.

On the other hand, according to the expert, the Iranian leadership is very much concerned about the potential collapse of the nuclear deal, as it could undermine the Rouhani cabinet's internal positions.

At the same time it's not quite clear how the EU member states will behave in case the US rip the nuclear accord up.

According to Abedin, the Germans and the French, and to a lesser extent Britons, are highly interested in re-entering the Iranian market: "The French, for instance, are investing heavily in the automotive industry and [holding] major negotiations with the oil and natural gas industry." He recalled that many business delegates have visited Iran in the past two few years from EU countries.

Still, although the EU regards Iran as a huge and lucrative market, "all these major European companies and their governments have been kind of tentative over the past two and a half years," the expert noted, adding that if "the US pulls out of the deal and makes an ultimatum to global companies… [they] and their governments would be in a very difficult situation."

"So, I do think that we are moving toward some kind of a crisis… and the warming business climate in Iran may start to freeze over again, unfortunately," Abedin concluded.

Meanwhile Berlin called upon the US to refrain from withdrawing the agreement amid rumors of a possible US exit fueled by President Donald Trump's statements.

Gabriel noted that the US exit from the JCPOA may deteriorate the North Korean crisis since Pyongyang is unlikely to agree to some sort of a nuclear deal if a similar one with Tehran fails.

According to the German foreign minister, France and Britain are also urging Trump to remain committed to the agreement.

For its part, the Chinese Foreign Ministry expressed hope that the Iranian nuclear accord will be further implemented despite reports about a possible US withdrawal from the deal.

The Future of the JCPOA is in Congress's Hands

Russia
Possible US Exit From Iran Nuclear Deal to Have Negative Consequences - Kremlin
While weighing the pros and cons of Trump's possible decision, the US mainstream media alleged that the withdrawal from the deal wouldn't be as easy as it seems.

According to The Financial Times, "under INARA rules, only Congressional leadership can initiate snapback sanctions under expedited procedures," in case Trump decertifies the deal.

Interestingly enough, while the Democrats unanimously oppose Trump's potential decision, there is no unity among the Republicans about the matter.

The Washington Post also assumes Republican Iran hawks don't have "the support they need to push something through" in Congress. The media outlet cited the fact that Senate Majority Leader Mitch McConnell (R-Ky.), Republican Sens. Jeff Flake (Ariz.), John McCain (Ariz.) and Susan Collins (Maine) signaled they were not sure whether they will vote for the re-imposition of sanctions, while Sen. Rand Paul (R-Ky.) and House Foreign Affairs Committee Chairman Edward R. Royce (Calif.) stated clearly that they don't think Trump should exit the JCPOA.

Citing the proponents of decertification, the media outlet alleged that "the Trump administration can use the process as a way of persuading European allies to join the United States in advocating for a stronger Iran deal," which may envisage tough restrictions on Tehran's ballistic and cruise missile programs in particular.