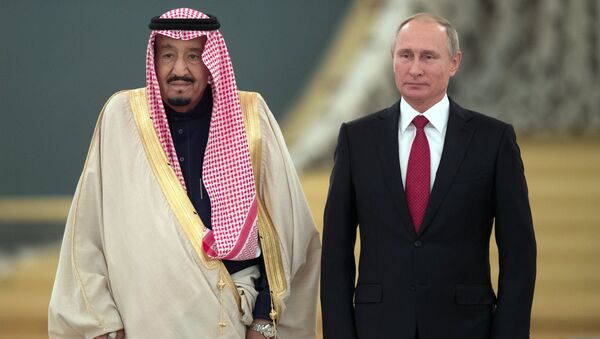 © Sputnik / Sergey Guneev
/
Go to the mediabank
Subscribe
International
India
Africa
The Saudi King's first ever visit to Russia is already bearing fruit as Moscow and Riyadh have reached a number of agreements, including in the military-technical and energy fields. Sputnik spoke to experts about the significance of the political event.

MOSCOW (Sputnik) — Amid the unstable situation in the Middle Eastern region caused by a number of conflicts including those in Iraq, Yemen and Syria, the visit of Saudi King Salman bin Abdulaziz Al Saud to Russia indicates deepening relations between Moscow and Riyadh, experts told Sputnik.

On Wednesday, Saudi Arabia's delegation led by King Salman bin Abdulaziz Al Saud arrived in Moscow for a four-day state visit. This is the first ever visit of the reigning Saudi monarch to Russia.

The talks between Putin and King Salman were held on Thursday as part of the latter's official visit to Moscow. As for international issues on the agenda of the Russian-Saudi high-level talks, the Middle East crises have been in the spotlight. Russian Foreign Minister Sergei Lavrov said that the special focus during the negotiations had been placed on the situations in Syria, Iraq, Libya, Yemen, as well as the crisis in the Persian Gulf and the Israeli-Palestinian settlement. According to Lavrov, both Moscow and Riyadh agreed that fighting terrorism should be a priority in Syria.

"King Salman’s visit comes at a time of great tumult in the Middle East, with Russia becoming an increasingly influential actor capable of playing a mediating role in key conflicts, including Iran, Syria and Yemen. As key regional power, Saudi Arabia has national security interests in all these countries. Therefore, it is natural that Russia and Saudi Arabia try to enhance their strategic dialogue and attempt to find a greater space for common ground," the Arabia Foundation think tank Deputy CEO Firas Maksad said.

Maksad argued that Saudi Arabia understands that Russia could become an important party to settle Syrian crisis, even given the differences in approaches of the two states toward Syria and Iran’s increasing influence there.

"This is reflected in Saudi Arabia’s announced support for the Russian-led Astana peace process, while at the same time affirming that any political transition needs to conform to the parameters of the Geneva Agreement, which calls for power sharing between the Syrian regime and the opposition," he stressed.

CEO of Gulf State Analytics, a Washington-based geopolitical risk consultancy, Giorgio Cafiero pointed out that Moscow and Riyadh managed to find a common ground in the framework of Syrian crisis despite initial disagreements over the fate of Syrian President Bashar Assad and Russia's military involvement in Syria.

"The Russians and Saudis have found common cause in combating Daesh terrorist group (ISIS, Islamic State, banned in Russia), of which many Russian and Saudi citizens fled to Iraq and Syria to fight for after the so-called Caliphate's unprecedented rise to power in 2014. Islamic State raised entirely new security concerns for the Russian and Saudi governments, particularly regarding such battle-hardened extremists returning home to wage terrorism," Cafiero said.

The analyst added that such causes could also positively influence Russia's ties with such countries as Jordan and Kuwait, especially after the visit of the Saudi King.

The CEO of Gulf State Analytics assumes that such strong signal as King Salman's visit to Moscow is unlikely to shift Riyadh's focus from Washington.

"Saudi Arabia continues to see Iran as the top regional threat, thus given [US President Donald] Trump's increasingly anti-Iranian foreign policy and Moscow's close alignment with Tehran, the Kingdom is more aligned with the United States than Russia," Cafiero noted.

The analyst added that Riyadh would likely use the growing ties with Moscow as leverage over Trump's administration, particularly if tensions between Russia and the United States intensified.

The Arabia Foundation deputy CEO meanwhile noted that Moscow showed itself as a good mediator, and if Russia and the United States found the common ground on various world conflicts, prominent results may be achieved in resolving those crises.

"Rather than having to choose sides, [Russian] President Putin has positioned himself as an influential mediator amongst the relevant regional players, be it Saudi Arabia, Iran, Israel, Turkey or Jordan. If Russian diplomacy is coupled with an understanding with the United States on how to tackle key issues such as ISIS [Daesh], Iran and Yemen, significant progress can then be achieved," Maksad said.

At the same time, Maksad highlighted that Saudi Arabia did not decide to sacrifice relations with the United States in the Middle East to those with Moscow, but rather was "diversifying" its foreign policy options given the current geopolitical realities in the region.

During the high-level Russian-Saudi talks, 14 bilateral agreements have been signed by Moscow and Riyadh.

In particular, Saudi Arabia signed preliminary agreements on the acquisition of Russian S-400 air defense systems and an agreement on cooperation in the research and peaceful use of space. Memorandums of understanding were signed between Russian and Saudi communications ministries, as well as between Russia's Industry and Trade Ministry and Saudi Arabia's Commerce and Investment Ministry.

The framework of economic, cultural and scientific cooperation has been agreed as well as cooperation in the area of agriculture and peaceful use of nuclear energy.

The experts stressed that the sides understood the importance of stability and cooperation between the states in the economic area, apart from the military field.

"The economic peace is no less important than the geopolitical, with the Saudi-Russian understanding on oil production levels remaining central to the economies of both countries and the stability of the global economy," Maksad said.

According to Dr. Saud Saleh Al-Sarhan, the secretary general of the King Faisal Center for Research and Islamic Studies, King Salman’s visit is of historical importance both in political and economic aspects of bilateral relations. Dr. Saleh Al-Khathlan, a professor of political sciences at King Saud University in Riyadh, shares his opinion.

"The Russians and the Saudis are now trying to institutionalize the relationship between the two countries. We understand the importance of each other in terms of stability in the region and stability in energy market … Energy and military agreements are the most important ones because there was some kind of hesitation on both sides," Sarhan said.

He added that the signed military agreements provided not only for weapons delivery, but also for exchange of military technologies.