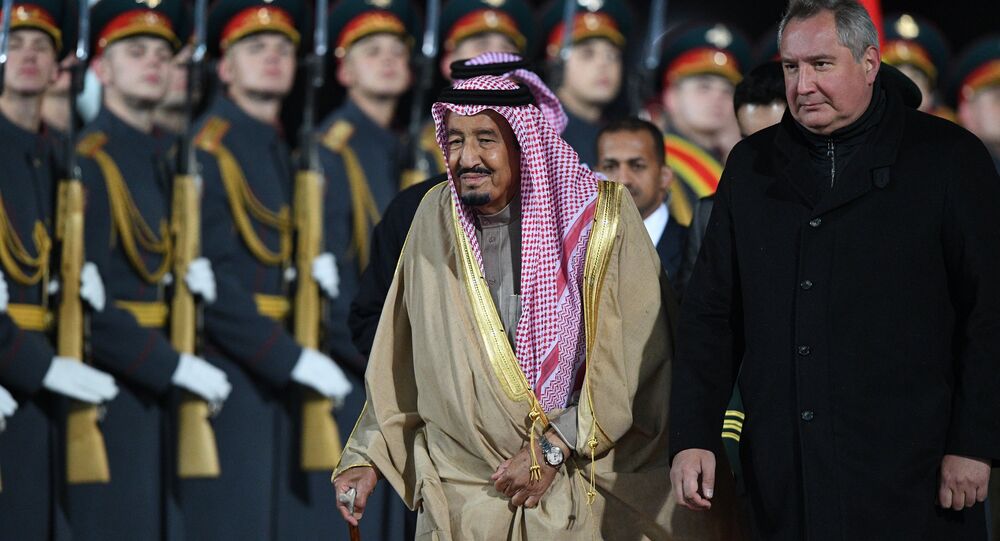 King Salman of Saudi Arabia, who is currently on his first-ever visit to Russia, is set to meet with President Putin in the Kremlin on Thursday. Sputnik has reviewed what is expected to top the agenda of the talks.

On Wednesday, King Salman bin Abdulaziz al-Saud of Saudi Arabia, accompanied by a royal retinue of up to a thousand people, started his visit to Russia, which is set to last until October 7.

The trip has already been branded historic, not only because it is the first time a reigning Saudi monarch has ever visited Russia in the history of bilateral relations, but because the two countries are expected to hold exhaustive negotiations on many global issues and sign a number of important documents.

Ahead of the scheduled talks between the Russian President and the Saudi King, Kremlin spokesman Dmitry Peskov said that the potential for the bilateral cooperation is "far from being unleashed in full" and that the two countries are "demonstrating political will" for its further development.

Dmitry Peskov said that military-technical cooperation, among other topics, is likely to be discussed by the two leaders.

Also on Wednesday, President Putin said that he plans to discuss the potential extension of the OPEC+ oil production cut agreement to the end of 2018 with the King of Saudi Arabia. However he will wait to make a decision until near to the expiration of the existing pact in March. The arrangement that took effect in January benefits oil consumers as well as producers because it guarantees a stable market, he said.

Speaking at a panel session of the Russian Energy Week forum in Moscow, the Russian leader noted that Moscow maintains contact with its key partners, both with OPEC in general and with the main producers. Putin told attendees that Russia will have the pleasure and honor of hosting the King of Saudi Arabia and that the leaders will certainly talk about the extension of oil production cuts.

The panel mediator then noted that the monarchy's major ally will always be the US when it comes to its geopolitical interests, and asked the Russian leader if he thought that the Saudis "are using him."

"You said, 'always will remain'.  Is there anything in the world that’s so absolutely constant? It seems to me, on the contrary, that everything’s changing," the President replied.

Meanwhile, Anwar Eshki, one of the Saudi King's closest advisers and the director of the Middle East Center for Strategic Studies, told Sputnik that the monarch is planning to discuss the Qatari crisis, Syria, defense issues and cooperation in peaceful nuclear development.

He said that he expects the signing of no less than six new agreements on economic cooperation.

With regards to Syria, he went on to say, Moscow and Riyadh seem to have demonstrated clear signs of rapprochement. Saudi Arabia, like Russia, advocates maintaining the territorial integrity of the Middle Eastern country, without any foreign influence. However, it admits that Russia has the right to maintain military bases there following the settlement of the crisis.

On Wednesday, the Russian Industry and Trade Ministry's press service said in a statement that Saudi Arabia is planning to invest in more than 25 agriculture, oil and gas, and real estate projects in Russia. The Russian Direct Investment Fund (RDIF) and the Saudi Public Investment Fund agreed to set up a joint Energy Investment Fund together with the Saudi oil company Aramco.

RDIF CEO Kirill Dmitriev earlier said that his Fund and its Saudi partners plan to ink more than $2 billion in investment deals during the King’s visit. He characterized the  "promising area of partnership" as including the supply and maintenance of oil and gas equipment, cooperation in shipbuilding and radio-electronics (particularly plans to expand shipbuilding capacities), projects on providing aviation traffic with automation facilities, navigation, as well as joint developments in the area of monitoring and transport supervision systems.

Russian Energy Minister Alexander Novak earlier said in an interview with The Financial Times that Moscow and Riyadh are also expected to sign, among others, a $1.1 bln agreement on the construction of a plant in Saudi Arabia by Russia's largest petrochemical producer, Sibur.

© AFP 2021 / Khalil MAZRAAWI
King's 'Historic' Visit to Moscow to Be Successful - Saudi Foreign Ministry
The two countries are also expected to set up a billion-dollar fund to invest in energy projects, alongside a deal to invest $150 mln in Russia’s Eurasia Drilling Company.

The King of Saudi Arabia has arrived in Moscow at the invitation of President Putin, which was accepted already back in 2007 by the late King Abdullah. However, due to the cooling in relations, particularly because of differences pertaining to the Syrian crisis,  the visit has been repeatedly postponed.