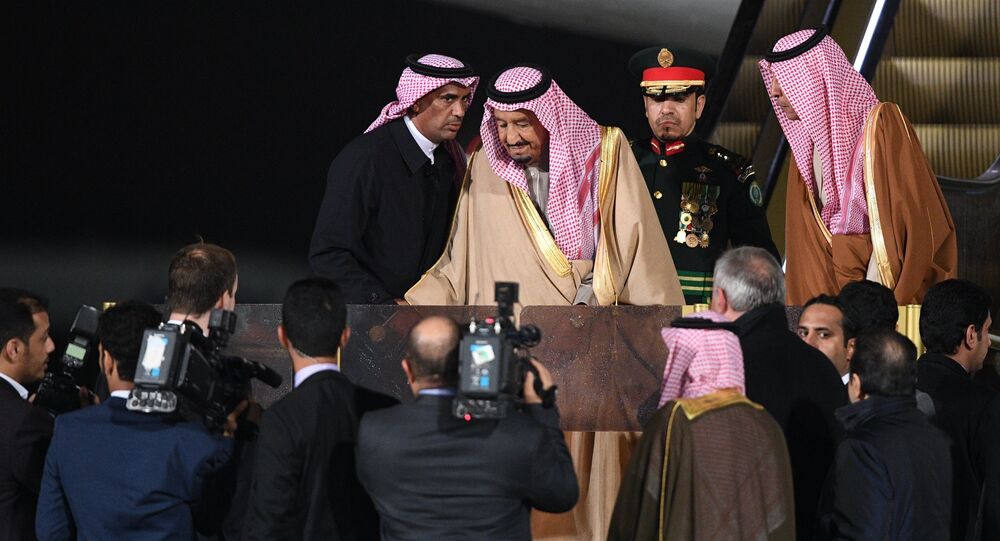 Saudi King Arrives in Moscow for First Ever Visit (VIDEO)

The King of Saudi Arabia, Salman bin Abdulaziz Al Saud, arrives in Moscow for a historically significant first ever visit to Russia.

King Salman of Saudi Arabia arrived in Russia on Wednesday on a first visit by a reigning Saudi monarch in the history of bilateral relations, a Sputnik correspondent reports from Moscow's Vnukovo airport.

King Salman will meet Russian President Vladimir Putin on October 5 to discuss a number of issues, including the stabilization of the situation in the Middle East. A Russian-Saudi investment forum will be held  before the meeting of the two states' leaders, with more than 200 Russian and Saudi companies expected to attend the event.

Earlier in the day, Saudi Arabia's Foreign Minister expressed his confidence that the visit of the Saudi King in Russia would be a successful one.

"The visit of the Saudi Arabian king [Salman bin Abdulaziz Al Saud] and his big delegation is considered to be historic, as this is the first visit of the head of the Kingdom to Russia. During the visit, a number of important documents are expected to be signed, which will contribute to the development of our relations," Saudi Foreign Minister Adel Jubeir said Wednesday at a meeting with Valentina Matvienko, the speaker of the Russian Federation Council, adding that "this visit will undoubtedly be successful."