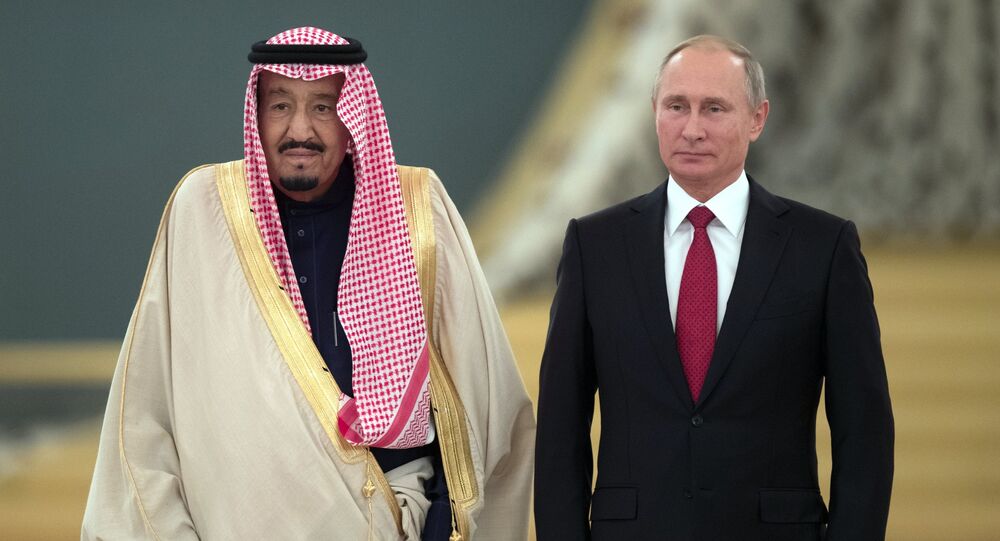 The Kremlin has called any concerns about Russia-Saudi defense industry cooperation groundless.

"We are convinced that the development of Russian-Saudi cooperation is in the interest primarily of our two countries, in the interest of stability in the world and in the region, and, of course, it is in no way directed against a third country, so we consider any concerns expressed in connection wit this to be groundless," Peskov told reporters.

The Pentagon has expressed concern about reports that Saudi King Salman bin Abdulaziz Al Saud and Russian President Vladimir Putin agreed at their talks on the purchase of S-400 air defense systems by Riyadh. The agreement on the S-400s was previously reported by Arab television channels.

Peskov did not confirm the report.

"The situation in Syria has of course been discussed. This is all that I can tell you," Peskov said when answering a question on whether the issue of the political future of Syrian President Bashar Assad was discussed by the two leaders.

Dmitry Peskov refuted reports claiming that the Kremlin had been rebuilt ahead of Saudi King Salman bin Abdulaziz Al Saud's visit to the Russian capital to facilitate the monarch's moving around the official residence of the Russian president.

Earlier in the day, the Kommersant newspaper reported that the main residence of the Russian leader had been "rebuilt" as the Saudi monarch planned to get around the Kremlin premises in a specifically tailored electric car. Particularly, the palace's stairs were reportedly equipped with hand-rails.

"In this case, I can neither confirm nor deny it. In any case, this has to do with the technical issues of the visit organization, and, as a rule, they are not disclosed. No, this is, you know, a tiny, sure, a tiny exaggeration, I'd say, a creative one, because it does not correspond with reality. The Kremlin was not rebuilt," Peskov said, commenting on the issue.

"The military-technical cooperation topics were really on the agenda of yesterday's Russian-Saudi top-level talks. I cannot give you more details than those that were given. Of course, this issue is a very sensitive one," he said, adding that work on it would continue.

The talks between Putin and King Salman were held as part of the latter's ongoing official visit to Moscow. As a result of the talks, 14 bilateral agreements have been signed by Moscow and Riyadh.