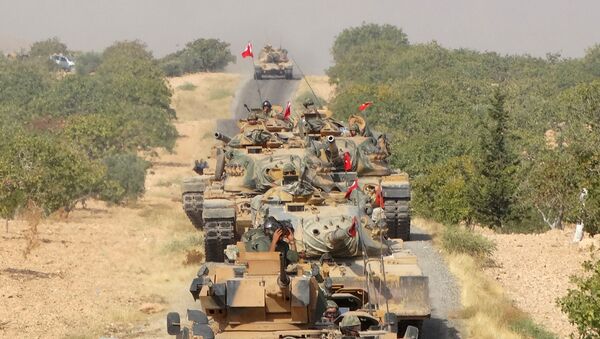 The Turkish president has announced plans to start a new military operation in Syria in a move which has been rumored for weeks.

Turkish President Recep Tayyip Erdogan has announced plans to deploy the country's soldiers to Syria's Idlib, where the Free Syrian Army rebel fighters backed by Ankara have launched an operation.

"We intend to further enhance our steps in providing safety to Idlib now. There is a serious operation in Idlib today and it is going to continue," Erdogan said as quoted by Anadolu news agency, adding that the "Turkish soldiers are not there yet."

He also vowed support for "our brothers in Idlib," who left Aleppo for Idlib, apparently referring to militants who left the city freed by the Syrian army in December 2016 as a result of an agreement backed by Russia.

Next in Line: What al-Nusra Should Now Fear the Most in Its Idlib Stronghold
Currently, Idlib is mostly controlled by Tahrir al-Sham, a militant group led by al-Nusra Front terrorist group (banned in Russia), al-Qaeda's former Syrian affiliate. The group is not party to the agreement on setting up a de-escalation zone in Idlib agreed upon during the Syrian peace talks in Astana brokered by Russia, Iran and Turkey.

"We will never allow a terror corridor along our Syria border," the Turkish president said.

"We will continue to take other initiatives after the Idlib operation," he added.

Erdogan also said that Russia has agreed to provide air support to the operation, however, there has been no official comment by the Russian Defense Ministry yet supporting the claim. Nevertheless, Russian Foreign Minister Sergei Lavrov said earlier this week that Russia is ready to support armed groups fighting al-Nusra Front in Syria's Idlib de-escalation zone.

"Turkey will be providing protection inside Idlib while the security beyond the borders of Idlib will be provided by Russia," he said.

"Interactions with the [Syrian President Bashar al-Assad] regime is a process that Russia is conducting, as far as Turkey is concerned, we are taking measures and we will continue to take measures in other matters," Erdogan said, though there has been no reaction from Damascus yet concerning the launch of the Turkish new military campaign in Syria.

Media reports suggested Ankara plans to start an operation in Idlib over the past few weeks.

On August 24, 2016, Turkish forces, supported by Free Syrian Army rebels and US-led coalition aircraft, launched a military operation dubbed the Euphrates Shield to clear the Syrian border town of Jarablus and the surrounding area from Daesh terrorist group. The campaign was Turkey's first incursion into Syria, however, earlier Turkish forces had attacked Kurdish positions in Syria from its side of the border. The operation has been widely criticized both by the Syrian Kurds and Damascus, who have accused Ankara of violating Syria's territorial integrity.

As Jarablus was retaken, the joint forces of Ankara, the coalition and Syrian rebels continued the offensive southwest. At the end of February, Chief of the Turkish General Staff Hulusi Akar said that the city of al-Bab was under control and the goals of the Euphrates Shield operation in Syria had been achieved. During the operation to liberate al-Bab from Daesh, Russian and Turkish military aircraft have repeatedly jointly bombed Daesh targets for the first time. The joing campaign was approved by the Syrian authorities. The campaign ended on March 29.

Asked whether the operation in Idlib would be similar to the Euphrates Shield, Erdogan said: "When you enter the boxing ring you don't count your punches."