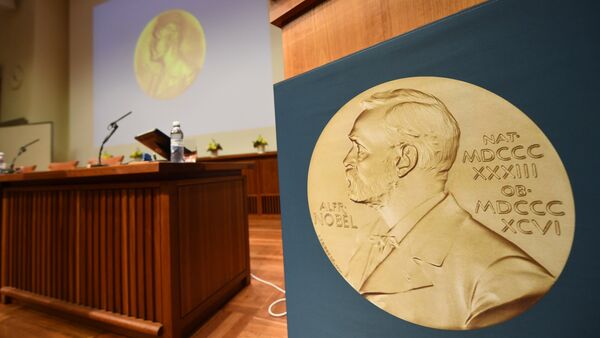 As the Nobel Peace Prize was given to the International Campaign to Abolish Nuclear Weapons earlier today, a Sweden-based expert at the transnational foundation for peace and future research, Jan Oberg, commented on the committee’s choice.

Talking about the 2017 Nobel Peace Prize, which had been awarded to the International Campaign to Abolish Nuclear Weapons, the expert said that the committee has gotten out of the ditch to the road of peace and honored Alfred Nobel’s will, which has been violated a number of times in recent years.

“Humanity’s majority view  and wish is to live in a nuclear free world. If you take all the military and political leaders in the nuclear weapon’s countries they are probably about 1,000 or so. These people never got any kind of authorization, mandate or democratic decision to hold the power to decide whether to continue humanity’s life or not,” Oberg said.

He further explained why nuclear weapons are not legal weapons at all.

The expert further said that getting rid of all the nuclear weapons is a matter of political will and “moral courage to scrap them.”

“It is time that the nuclear countries: NATO, Russia, China, India, Pakistan and Israel join the rest of humanity in this civilization struggle,” Oberg said.

He further said that back in the day, there were people who thought that slavery was okay, but civilization decided that it was not dignified of humanity to do such things.

“So nuclear weapons must go the same way as slavery did and they will go,” the expert stressed.

“They can eradicate humanity and make life impossible on Earth. It is nonsense, propaganda and ill-conceived theory financed by the institutes, think tanks and military academy that never thought these things through,” Oberg said.

Earlier in the day, it was announced that the 2017 Nobel Peace Prize has been awarded to the International Campaign to Abolish Nuclear Weapons (ICAN), which was praised by the Nobel Committee for its work on ensuring that there is an international legal ban on nuclear weapons, similar to the prohibitions against biological and chemical weapons, as well as land mines and cluster munitions.

The Norwegian Nobel Committee, appointed by the Norwegian Parliament, determines the recipient of the Nobel Peace Prize award, which is presented in Oslo. In the last 10 years, the Peace Prize was awarded to former US President Barack Obama, the Colombian president who brokered a historic peace deal with the FARC rebels, the Tunisian National Dialogue Quartet, the EU, Malala Yousafzai (a Pakistani activist for female education) and former US Vice President Al Gore, among others.