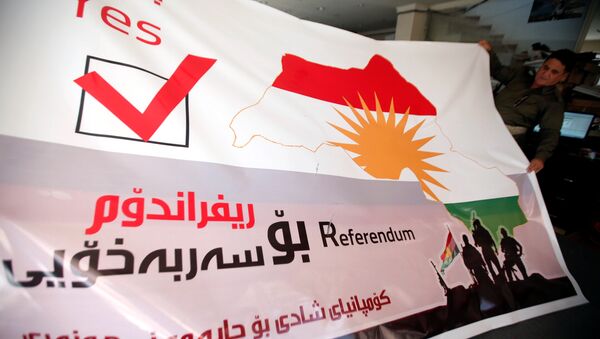 Some 91.83 percent of voters in Iraqi Kurdistan supported the idea of independence from Baghdad, as 3.4 million ballots were counted, the referendum commission said on Tuesday.

It was earlier reported that a total of 3.4 million people voted in the referendum that was held on Monday.

The commission noted that highest level of "yes" answers was recorded in the Kirkuk province, which nominally is not part of the Iraqi Kurdistan region but is controlled by Kurds, as well as in the Sinjar region, where 90 percent voted in favor of independence. The lowest level of support was registered in the city of Sulaymaniyah, where only 51 percent supported the independence.

The official results are expected to be announced on Thursday.

The development comes as President of Iraqi Kurdistan Masud Barzani called on the Iraqi central government "not to close the door" for dialogue following the recent referendum. He stressed that Iraqi Kurdistan "has always been a factor of stability in the region and will remain so."

Baghdad Gives Iraqi Kurdistan Three Days to Hand Over Control of Airports
Earlier in the day, Iraq's Cabinet of Ministers demanded that the Kurdish autonomy authorities transfer control over all border points of the region, including airports to the central government, at the same time urging foreign states to cease cooperation with Iraqi Kurdistan in the oil sector.

The Kurdish referendum has also displeased the countries that have a Kurdish minority, including Turkey and Iran. Turkish Prime Minister Binali Yildirim did not rule out on Monday that Ankara would terminate oil transit from Iraqi Kurdistan in retaliation for the vote.

The decision to hold the independence referendum was made by Iraqi Kurdistan's leaders in June.