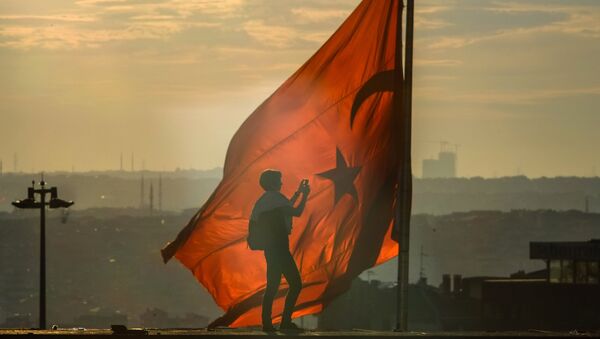 Amid the deterioration of relations between Germany and Turkey, Berlin decided to suspend arms exports to the country. A Turkish minister has slammed the move.

MOSCOW (Sputnik) — Turkey’s EU affairs minister Omer Celik said that Germany’s decision to suspend arms exports to the country will damage counterterrorism efforts in general as well as will pose a threat to EU security.

"This [to put arms exports to Turkey on hold] will weaken Turkey's anti-terror fight, which will in turn pose a threat to Germany and Europe's security … Terror groups such as Daesh [ISIS, banned in Russia] and the PKK [Kurdistan Workers’ Party] are now active across EU capitals. This should not be forgotten: with this effective struggle Turkey is protecting its borders. However, at the same time it protects security and borders of the EU," Celik said, as quoted by the Daily Sabah newspaper.

'Nazism': Erdogan Lashes Out at Merkel, Schulz for 'Anti-Turkish' Comments
On Monday, German Foreign Minister Sigmar Gabriel said that Germany would put on hold most weapon deliveries to Turkey.

Later in the day, German Chancellor Angela Merkel said in an interview with NDR Info radio she did not support the idea to completely suspend arms exports to Turkey.

"Turkey is a NATO member together with us, and we decide in each single case which weapons we export … we are in a state of a common fight against the IS [ISIS, Daesh, banned in Russia] and Islamist terrorism, so we need to consider carefully each decision," Merkel said, adding that Germany needs to adhere to these principles despite all political differences.

The relations between Berlin and Ankara have soured over several months after Germany banned several Turkish officials from coming to the country to campaign for Turkish President Recep Tayyip Erdogan ahead of a referendum that granted him more executive powers. Erdogan then compared the authorities in Berlin with Nazis.

Tit for Tat: Furious Ankara Issues Travel Warning for Turks in Germany
In May, Ankara canceled a German delegation's visit to the Incirlik military airfield in Turkey, where German military personnel and jets were stationed, the day before the visit was scheduled to begin. In early June, Berlin responded to Ankara's move by announcing the withdrawal of its troops from the base, which started in July.

The already strained relations have been further damanged as a result of the statements made by main German chancellor candidates Angela Merkel and Martin Schulz during debates held earlier this month, who voiced opposition to Turkey's membership in the EU. The Turkish president compared the "anti-Turkish" to "Nazism."