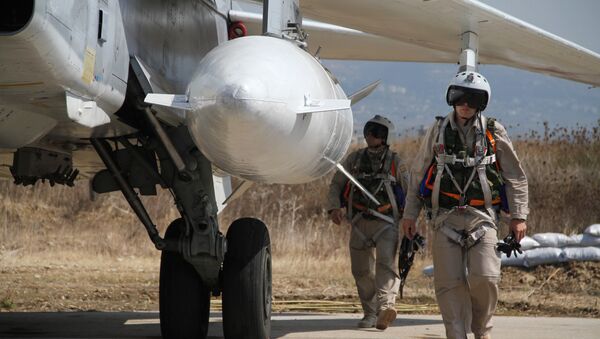 The Russian Defense Ministry has reported that it has found and eliminated another four Daesh warlords, including the self-proclaimed caliphate's 'minister of war'. RIA Novosti military observer Andrei Kotz provides an overview of the history of Russia's operations against high value Daesh targets, and how it all began.

The Russian Defense Ministry confirmed Friday that it has found and eliminated about 40 Daesh militants at a hidden command post in Deir ez-Zor province, eastern Syria. Four powerful warlords, including Blackwater-trained Daesh 'minister of war' Gulmurod Khalimov, was among those killed. The US State Department had earlier posted a $3 million bounty on Khalimov under its Rewards for Justice program. Abu Muhammad al-Shimali, another Daesh leader who was known as the 'Sharif of Deir ez-Zor' was also killed. The latter was in charge of finances and the redeployment of new recruits to Daesh training camps.

Four Influential Daesh Warlords Annihilated by Russian Strike Near Deir ez-Zor
The Defense Ministry explained that it had received information about the meeting of the terrorists earlier this week. After confirming the information and conducting additional reconnaissance, Su-34 and Su-35 planes were scrambled from the Russian base in Hmeymim, western Syria. The bombers destroyed the Daesh command post using bunker-busting bombs.

In an article on the subject, RIA Novosti military observer Andrei Kotz decided to look back on other high-ranking terrorists Russia has found and eliminated in the course of its two year operation in Syria.

The Hunt for the Big Enchilada

As expected, Abu Bakr al-Baghdadi, the leader of the self-proclaimed Daesh caliphate, has topped many of the world's most wanted terrorists lists for a long time. The US State Department issued a $10 million bounty for solid information on his whereabouts in 2011. At the time, Baghdadi was one of the leaders of al-Qaeda in Iraq. In 2013, the terrorist leader and his men expanded into eastern Syria, and proclaimed the Islamic State of Iraq and Syria.

Terrorists Face Crushing Defeat in Eastern, Central Syria
In 2014, Baghdadi's jihadists would go on to conquer wide swathes of western Iraq, setting up a base of operations in Mosul, the country's second-largest city in June 2014. A month later, Baghdadi called on the Muslims of the world to join him in "holy war," and to expand further – to Jordan, Israel, Palestine, Kuwait, Lebanon, Turkey, and Russia. Russian and Western intelligence services worked feverishly to try to find and kill him. 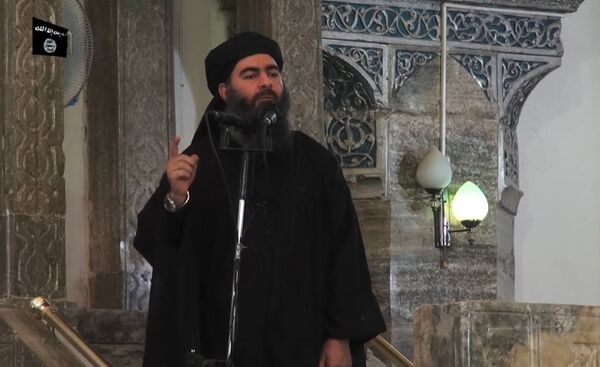 This July 5, 2014 photo shows an image grab taken from a propaganda video released by al-Furqan Media allegedly showing the leader of the Islamic State (IS) jihadist group, Abu Bakr al-Baghdadi, aka Caliph Ibrahim, adressing Muslim worshippers at a mosque in the militant-held northern Iraqi city of Mosul
© AFP 2022

"Reports of Baghdadi's death appeared in the media about ten times," Kotz wrote. "On June 10, 2017, Syrian media announced that he had been eliminated as a result of an air strike. Most experts took this news another case of hearsay. But on June 16, the Russian Defense Ministry said that it was possible that the high-ranking terrorist had died during a Russian airstrike in a suburb in southern Raqqa. The discovery of Baghdadi's body has yet to be reported. However, since that time he has not officially appeared in public, nor has he released videotapes for supporters. It can be said with a high degree of probability that he really is dead."

On the Ground and in the Air

Two more senior Daesh leaders were killed in Deir ez Zor province this past June during Russian airstrikes. These included field commanders Abu Omar al-Beljiki and Abu Yassin al-Masri, influential jihadist leaders who had over 200 fighters under their command.

Here, Kotz suggested that it was worth mentioning one interesting fact: "Soon after the Russian Ministry of Defense reported on the terrorists' elimination and published their photos, internet users discovered that one of them may have been a personal acquaintance of Arizona senator John McCain. During a visit to Syria and meetings with the 'moderate opposition', the politician was shown speaking to al-Masri in an almost friendly manner. This was captured by the cameras of leading Western TV networks, including CNN."

A month later, in July 2017, Greek media reported on the elimination of Lavdrim Muhaxheri, aka Abu Abdullah al-Kosova, an Albanian terrorist from Kosovo. "His nickname was 'the butcher'; Daesh propaganda videos showed him personally beheading Christians, Shiites and Alawites," Kotz recalled.

"Muhaxheri had returned to Syria in May after a four month trip to Albania and Kosovo. According to media reports, he was killed in the province of Idlib during a joint operation involving the Russian Aerospace Forces and Syria's 'Tiger' Special Forces unit. Six of his 20 personal bodyguards were also eliminated."

Russia's military successes against high ranking Daesh leaders first began ramping up in August 2016, when a Su-34 struck a large concentration of militants in Aleppo province, eliminating about 40 terrorists and killing Daesh second-in-command Abu Mohammed al-Adnani, better known as Daesh's official media spokesman. Adnani was believed to be a leader of a branch of the terror group in Egypt's Sinai, and among those directly responsible for the destruction of the Russian Airbus A321 airliner in October 2015, which led to the deaths of all 224 passengers and crew onboard.

Operation Against Daesh, al-Nusra Front to Continue Until Their Destruction
"Russian air power made its first tangible 'slap in the face' to Daesh's leadership in early December 2015, just two months after the start of the Russian air operation in Syria," Kotz noted. "Bombers attacked terrorists in Latakia province using guided bombs, destroying a large group of terrorists, including Abu Abdu and several other field commanders. After the airstrikes, terrorist positions in Latakia were seriously shaken, and the Syrian Arab Army went on the offensive to win a number of significant victories over them."