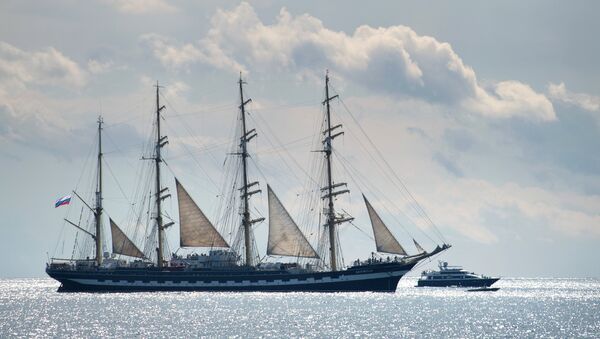 © Sputnik / Nina Zotina
/
Go to the photo bank
Subscribe
The Nordic countries' anti-Russian hysteria seems to know no measure. The Finnish military has notoriously stopped Russia's Kruzenshtern, one of the world's largest tall ships, from making a port call at the Åland islands on account of the alleged "Russian threat."

The almost 100-year-old Kruzenshtern, a Russian-flagged, four-mast training vessel, often seen in ports across Europe as Russia's ambassador, intended to dock in Mariehamn on the Åland islands from September 18-20. However, the request was ultimately turned down by the Finnish Armed Forces, the Finnish daily Hufvudstadsbladet reported.

Swedish Peace Camp on Demilitarized Finnish Isles Slammed as 'Russian Agents'
While Finland's Defense Command refused to comment further on the motivations for the negative decision, Finnish media instantly drew the public's attention to the fact that the visit would have coincided with Zapad 2017, the strategic Russian-Belarusian joint military exercise, which is scheduled for September 14-20 and have been widely described in Scandinavian media as "proof" of the perennial "Russian aggression."

Tomas Ries, a security expert from the Swedish National Defense College in Stockholm, suggested this was no coincidence and ventured that the "actual" purpose of the Russian request was to test its neighbor's reaction.

"This was carefully calculated and thought-out. It is as if Russia wanted to test Finland, in order to try to push the boundaries of what Finland would find acceptable," Tomas Ries said.

According to Ries, the demilitarized Åland islands are extremely vulnerable to outward aggression. In a wild stretch of imagination, Ries painted the Kruzenshtern as a sort of a Trojan horse filled with elite soldiers.

"While the vessel is certainly not up to date, you may nevertheless envisage that the so-called cadets on board are in fact Russian Spetsnaz soldiers. A couple of hundred of them could therefore embark in Mariehamn and quickly take over Åland by securing the airport and the harbors before heavy forces come ashore," Tomas Ries said, admitting that this was a theoretical and unlikely scenario, which Russia nonetheless "might want to practice."

Previously, the historic Russian tall ship had been a welcome guest in Finnish ports. It even visited Finland earlier this summer during the Tall Ships Races in Turku and Kotka.

​Local Åland leaders had been hopeful that a Kruzenshtern visit would help to improve the capital city Mariehamn's, chances of hosting the next Tall Ships' Race in 2021.

"Neither the local government nor the parliament has received any information. This is a decision taken wholly by the Helsinki Chief of Staff, and by extension the Finnish government," Katrin Sjögren told Finnish national broadcaster Yle.

Unlike the Kruzenshtern, which is strictly a training vessel, the autonomous and demilitarized Åland has been visited by tall ships formally registered as warships, which were granted exemption from the Åland Convention to the dismay of the Finnish Armed Forces, whose vessels or personnel are not welcome at Åland.

The Kruzenshtern was originally built and flagged in Germany in 1926 as the Padua. Twenty years later, Germany surrendered the ship to the Soviet Union as part of World War II reparations.

Subsequently, the Kruzenshtern has been renamed after Russian admiral Baron Ivan Kruzenshtern, who led the first Russian circumnavigation of the globe. It is currently used by the Russian Marine Academy in Kaliningrad which trains cadets in the fishing industry and research. At present, there are 164 cadets aboard the ship.

000000
Popular comments
Not so much the Finns, more like a NATO cowardly kind of thing.

Mikhas
30 August 2017, 12:55 GMT4
000000
seems like some of these FInns went bunkers. They seem to forget that the Red Army after repelling the Germans could have stayed in Finland, but they did not. Not only they do not know their own history, they are also ungrateful. Did they expect roses when they attacked Russia together with the Germans in WWII?