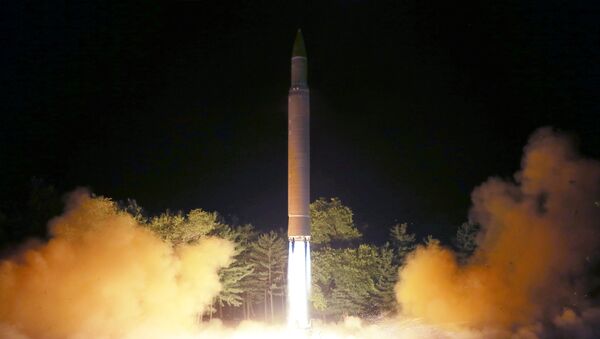 © REUTERS / KCNA
Subscribe
The South Korean military has reported that North Korea launched a series of unidentified projectiles into the Sea of Japan at 6:49 AM local time. The projectiles appear to be three short-range ballistic missiles, according to US Pacific Command (USPACOM).

The projectiles were launched from a site in the eastern province of Gangwon, traveling about 155 miles before plunging into the sea. The move was immediately reported to South Korean President Moon Jae-in.

The missile test was a failure, according to the US military. "Initial assessment indicates three short-range ballistic missile launches," the USPACOM statement read. "The first and third missiles at 11:49 a.m. and 12:19 p.m. failed in flight. The second missile launch at 12:07 p.m. appears to have blown up almost immediately."

The missile launch was expected, as the DPRK hinted at one in response to the ongoing Ulchi Freedom Guardian large-scale military exercises between South Korea and the United States.

"[Mr Kim] said that if the Yankees persist in their extremely dangerous, reckless actions on the Korean Peninsula and in its vicinity, testing the self-restraint of the DPRK, the latter will make an important decision as it already declared, warning the US that it should think reasonably and judge properly not to suffer shame that it is hit by the DPRK again," read a KCNA news release on August 16.

North Korea has also repeatedly threatened to attack Guam, a Pacific island territory of the US that carries a large American military presence.

This is the 13th North Korean missile or missile component test thus far this year. The last missile launch was on July 28, a test of the long-range Hwasong-14 intercontinental ballistic missile (ICBM) that could potentially strike the US mainland.