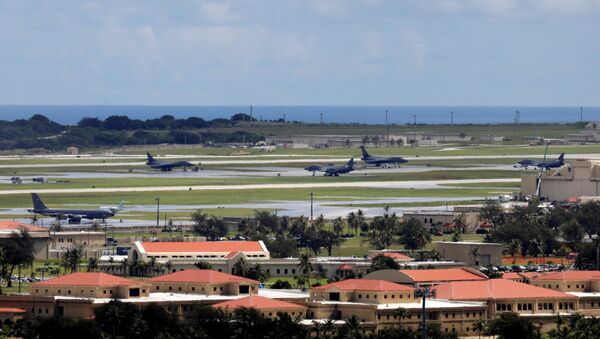 North Korea released a new propaganda video, which simulated a missile attack on the US Pacific territory of Guam and warned the US that it "will be punished for all its crimes."

It simulates a launch of intermediate-range Hwasong-12 ballistic missiles toward Guam "in an apparent bid to show that North Korea can take actions against the United States if determined" and warns the US that it "will be punished for all its crimes."

The nearly four-minute long footage starts with a recent announcement by Kim Rak-gyom, the commander of North Korea's Strategic Force, of Pyongyang's plan for "enveloping" fire near Guam.

The corresponding captions in Korean say that "Americans should live with their eyes and ears wide open. They will be tormented day and night by the Hwasong-12 rockets without knowing when they will be launched."

Why US Won't Leave Central Asia Any Time Soon and What It is Really After There
"They will be in jitters," it continues.

The video, which was first spotted by South Korean news agency Yonhap, was uploaded by North Korea's propaganda website Uriminzokkiri over the weekend, ahead of the joint US-South Korean Ulchi Freedom Guardian (UFG) military drills, which kicked off on Monday.

It also contains footage of tests of a salvo of what appeared to be Scud-ER ballistic missiles and zooming in on Guam seen from space.
"[We] just wish US policymakers should seriously think twice ahead of an obvious outcome [of a war]," it warns.

The corresponding captions, as translated by other media sources, suggest that "if a single bullet lands in the territory of Guam, the US' bluffing will be revealed to the entire world as fake."

"All North Korea needs to do is to place its hand on the button and press it when the right time comes," it warns, leaving the US to live "in fear and anxiety the whole time."

"They will sweat so much in this hot summer weather," the video says, referring to the US servicemen and leaders shown in it.

"Time is not on the US side," it warns, showing a photo of US Defense Secretary James Mattis.

World
World Isn't on the Brink of Nuclear War, But Does Face a 'Serious Crisis'
Closer to the end, it shows US President Trump standing in a cemetery with dozens of crosses.

"The fate of the US, with its many crimes, ends here," it reads and follows with a show of force, a North Korean military parade.

The video ends with bomb-ticking noises and a countdown to the UFG drills.

The 10-day joint US-South Korean military exercises, which are currently underway, involve about 17,500 US servicemen and about 50,000 South Korean troops. They have been criticized by Pyongyang as "reckless behavior driving the situation into the uncontrollable phase of a nuclear war."

The diplomat said that Pyongyang has finished preparations for a strike on the US territory of Guam and is ready to carry it out.

"As you know, we have completed the preparation of the Guam strike. Everything will depend on whether the United States acts sensibly or not. If they do not do so, they will be shamed yet again on the Korean Peninsula in front of the whole world," Jin Jong Hyop said.

"They must stop blatant provocations and unilateral pressure," Jin Jong Hyop said. "This will determine whether there will be a war on the Korean Peninsula or not.