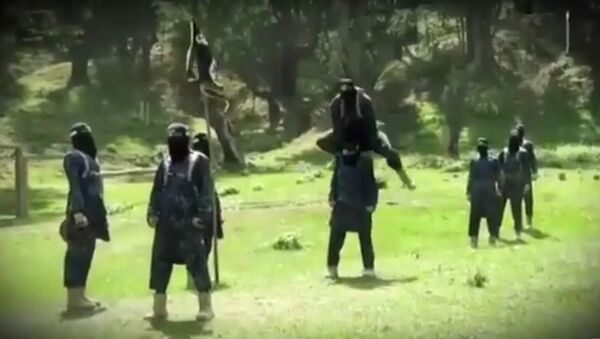 Grant Ferowich
All materials
US Army Gen. John Nicholson, the top ranking US commander in Afghanistan, made a promise on Thursday to "annihilate" Daesh and "crush the remnants" of Al Qaeda in Afghanistan.

"We will not fail in Afghanistan," Nicholson said. "Along with our Afghan partners, we will relentlessly pursue ISIS-K [Daesh’s Afghani affiliate] and annihilate them," he said.

Sputnik reported in June that Daesh militants had stormed the Tora Bora tunnel complex in eastern Afghanistan, kicking out the Taliban in the process. "The Taliban escaped from the area last night and left us to [Daesh] with our women and children," local elder Juma Gul said. "There was no resistance by the Taliban against [Daesh], and local tribes had no way to fight them anymore, so we just escaped."

Although Afghan security forces supported by NATO airstrikes have targeted terrorists in Tora Bora in the past, no such help was provided in June when the Afghan government was alerted to Daesh’s march to the cave hideout Osama bin Laden once called home. "I informed government forces to target [Daesh]" as they made their way to the caves in the Blue Mountains [Tora Bora], Afghan MP Hazrat Ali said on June 15.

"I told them they are trying to capture Tora Bora, but they did not pay attention."

US President Donald Trump has made clear since the beginning of his administration that Daesh needs to be eliminated. Until this week, however, it was unclear whether he would be open to sending more US troops to the war-torn country, where US forces have been present for 16 years.

"We have wasted an enormous amount of blood and treasure in Afghanistan. Their government has zero appreciation. Let’s get out!" Trump said via Twitter November 22, 2013. But as president, Trump’s calculus for Afghanistan clearly evolved into the more conventional policy approach.

​The "new" policy promulgated by Trump during a Monday speech gives military commanders greater authority to mobilize US forces in Afghanistan. Critics say the policy direction isn’t strategically innovative at all. "It was a fairly status quo speech with more bellicose rhetoric," Dan Feldman, former State Department special representative for Afghanistan and Pakistan, told Bloomberg on Tuesday, adding that Trump’s approach adopts the "hallmarks of the Obama approach."

Nevertheless, Nicholson will likely get the wish he expressed to Congress earlier this year. "I have adequate resourcing in my counterterrorism mission," the US Army general told the Senate Armed Services Committee in February. "In my train, advise and assist mission, however, we have a shortfall of a few thousand" troops, Nicholson explained, noting that replacement forces could come from US armed forces or NATO allies. At the time, the commander said the Taliban had made significant territorial gains over the preceding 12 months.

During the testimony, Nicholson observed that despite 16 years of drone strikes, ground skirmishes and conventional manned aircraft sorties, the fight had reached a stalemate. This sentiment was quickly validated by Arizona Senator John McCain, who said during the hearing: "for too long our strategy in Afghanistan has been: Don’t lose."

Passing off responsibility to military commanders to make decisions on the ground is "dangerous," the Council on Foreign Relations’ Max Abrahms noted in June. More troops "won’t affect the outcome there," Abrahms, a terrorism theorist at Northeastern University in Boston, said.

More than 100,000 US troops were deployed in Afghanistan in 2011. As of 2017, there were roughly 12,000 US military personnel stationed in the Central Asian nation, though until recently the Pentagon had concealed the true figure by stating on the record that just 8,400 troops were in the country. The Defense Department’s "arrogance and heightened grandiosity" motivated efforts to obscure the actual fact, former State Department official Matthew Hoh told Sputnik International on Wednesday.

Is the US Joining Forces with Hezbollah to Fight Daesh?

Nicholson made a separate call on Thursday to the Taliban, telling the group, "lay down your arms and join Afghan society." A spokesman for the Taliban, Zabihullah Muhahid, fired back that the group is "not giving our guns to anyone and our Taliban are fighting until the last US soldier is no longer here in Afghanistan," the Associated Press reported.

The Iraq and Afghanistan conflicts have incurred $4 to $6 trillion in costs to American taxpayers, according to the Harvard Kennedy School of Government.