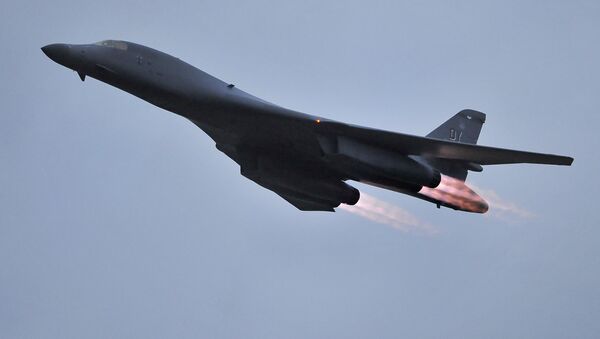 A US B-1B Lancer successfully tested a Long Range Anti-Ship Missile (LRASM) in Southern California on Wednesday, the US Navy said in a Friday release. The LRASM a stealthy cruise missile that will replace the service’s present anti-ship mainstay, the Harpoon missile.

Other uses for Lockheed Martin’s 1,000-pound projectile include competing with Raytheon’s Tomahawk cruise missile for services needing ground-launched weapons as well as giving the Joint Strike Missile, designed jointly by Raytheon and Kongsberg Defence & Aerospace, a run for its money. The JSM was designed with the F-35 Joint Strike Fighters in mind, hence the similarity in nomenclature, implying that F-35s globally may eventually carry the LRASM.

In May, an F/A-18 Super Hornet test-fired an LRASM, the National Interest reported. The first launch from a heavier B-1B this week marked a new milestone.

The missile conducted rather sophisticated maneuvers while cruising along its flight path. According to the US Navy, Wednesday’s test run featured the missile “using inputs from the onboard multimodal sensor” to signal to the weapon to drop its flying altitude as it moved closer to its target. The missile is equipped with a “datalink to provide updates as the missile approaches the target area,” CRS notes.

The weapon “dovetails with the US rebalance to the Asia-Pacific region and may prove invaluable in any maritime conflict as potential adversaries continue to equip their naval vessels with highly advanced weapons systems,” the Congressional Research Service noted in a 2014 research brief.