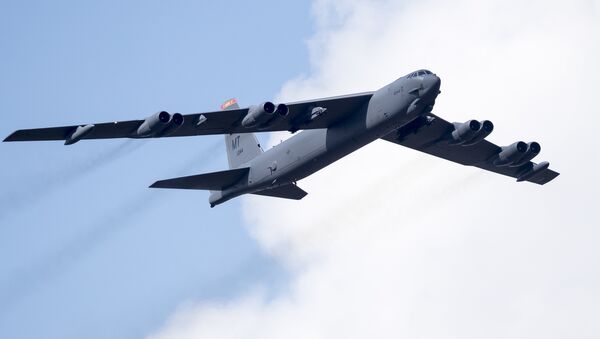 © AP Photo / Mindaugas Kulbis
Subscribe
International
India
Africa
Directed-energy lasers, capable of incinerating targets in real-time, could soon become a fixture on the B-52 heavy bomber, to defend the jet against incoming air- and surface-launched missiles.

“You can take out the target if you put the laser on the attacking weapon for a long enough period of time,” Greg Zacharias, chief scientist at USAF, told Scout. One option the service is considering would mount a ‘POD’ on the B-52s exterior, which the Air Force has begun developing, the scientist said.

Some worry that the POD would give away the B-52’s position to enemy radar, Scout noted. According to Zacharias, the POD platform would not be designed for pilots flying “stealthy” aircraft such as the F-35.

B-52 defense has grown in importance recently, given that the aging bomber has been in service for over five decades. While this demonstrates that an aircraft is battle-tested, if officials hope for the B-52 to continue to serve as the Pentagon’s “flying” bomb truck, lasers may support the platform’s ability to neutralize hostile missiles.

“You may not want to destroy the incoming missile,” Zacharias pointed out. Instead, the lasers could throw the missile off course and “spoof it,” he noted.

In December, 2016 the service announced that laser-equipped fighter jets could enter the active fleet during the 2020s. Laser weapons could stymie enemy drones, fighter jets, and ground forces without the use of explosive force, Sputnik reported.

On Tuesday, the Pentagon announced that the legacy B-2 bomber would receive a significant modernization to boost its sensor technologies, carry longer-range nuclear cruise missiles, and a “defense management system” to inform pilots of GPS coordinates associated with enemy anti-aircraft outposts.