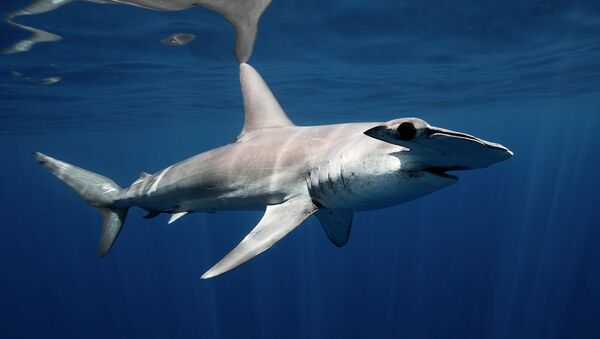 © Photo : Jorge Cervera Hauser
Subscribe
A Chinese fishing crew has been remanded in Ecuador on suspicion of catching endangered sharks in the Galapagos Islands marine reserve.

According to Environment Minister of Ecuador Tarsicio Granizo, when the Fu Yuan Yu Leng 999, bearing a Chinese flag, was caught with 300 tons of fish on Sunday, the catch consisted mostly of sharks, including protected species like the hammerhead.

Granizo told a news conference that a San Cristobal island judge ordered the 20 crew members held in custody pending court proceedings, saying, "Not necessarily all of the catch came from the marine reserve, but the fact that it included young sharks, even baby sharks, indicates that they could have been caught inside the reserve," according to the South China Morning Post.

Marine ecologist Pelayo Salinas, who first spotted the boat in restricted waters while on his way back from a 12-day research mission, told National Geographic, "There were thousands, if not tens of thousands, of sharks."

"This is going to be historic," he said. "The biggest seizure of sharks in the history of the Galápagos, for sure."

Even though Galapagos National Park enjoys popularity among tourists and scientists, Salinas said it doesn’t have adequate resources for security. “Resources are limited … The bad guys are every day making more money. Patrolling is expensive, especially for a county that is in economic crisis."

Ecuadorian police seized 200,000 shark fins in 2015. The appendages were en route to Asia where they are a popular ingredient for soup.

Crimes against protected flora and fauna can carry prison sentences of up to three years according to Ecuadorian law.