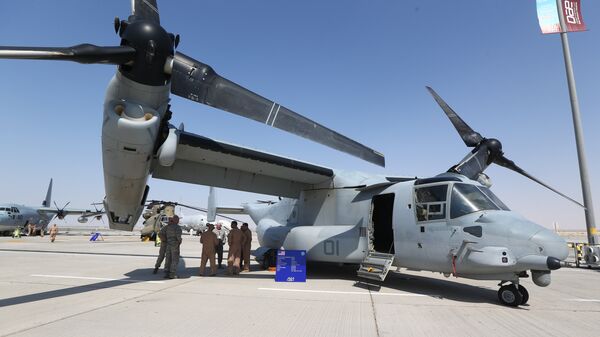 MOSCOW (Sputnik) – On Tuesday, the Japanese Defense Ministry said that since Friday, up to six Ospreys would take part in the military exercise, held in Hokkaido on August 10-28.

According to the NHK broadcaster, in early hours three Osprey jets took off from the US Iwakuni Air Base, located in Yamaguchi prefecture, and arrived to the US Misawa military base in Aomori prefecture, neighboring Hokkaido, to participate in the drills on the island.

Hokkaido Gov't Demands Guarantee That Japan-US Osprey Aircraft Drills are Safe
The broadcaster also reported that the joint drills will involve a total of 3,300 servicemen of the Japanese Self-Defense Forces and US Marine Corps.

Initially, Osprey aircraft were supposed to take part in the drills since the first day of the military exercise. However, the Japanese Defense Ministry requested the US Defense Department to suspend Osprey's flights over the country, following aircraft's crash in waters off Australia on August 5. On Friday, the Japanese Defense Ministry said Ospreys had been given clearance for flights after US investigators ruled out mechanical failures as the cause of the fatal crash off Australia.

Japanese authorities in Hokkaido and Okinawa have been calling to ground all Osprey aircraft over safety concerns. The aircraft has been involved in a series of crashes since the US Marine Corps began using it in 2007. On Tuesday, following the announcement of Osprey's participation in the drills, Hokkaido's governor Harumi Takahashi called on the central government to ensure the safety of the ongoing Japan-US joint drills on the island.