No to Nazism - Rallies Occur Across US Over Deadly Virginia March 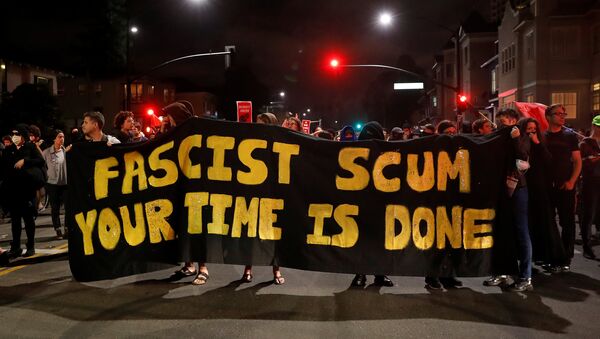 © REUTERS / Stephen Lam
Subscribe
Following Saturday’s violent and tragic events in Charlottesville, Virginia, resulting from a white supremacist demonstration, people in cities across the US gathered to express shock and firmly refute the racist sentiments espoused by Nazi-flag waving marchers.

US National Security Advisor on Charlottesville Violence: 'It's Terrorism'
In Atlanta, Georgia, in Oakland and Los Angeles, California, and many other cities across the country residents spontaneously — and peacefully — gathered to show support for the victims, hope for the US, and to strongly reject the message of the several hundred predominantly young white males who waved Nazi flags and chanted Nazi slogans during Saturday's violent march in a small Virginia college town.

During a peaceful rally in Los Angeles, supporters condemned racist actions, carrying hand-painted signs including "No KKK, no fascist USA" while a group with a message gathered in nearby Orange County.

The town of Santa Ana, California, also saw a rally stated to be "in opposition to the message of hate," and, "hope not hate," according to a news release, cited by NBClosangeles.com.

"The shocking violence in Charlottesville — and the abhorrent ideology behind it — have no place in America or anywhere in the world," Garcetti said.

"Angelenos and people everywhere condemn these acts of hatred, and are deeply saddened by the loss of life and injuries suffered today," he added.

California Senator Dianne Feinstein, herself no stranger to witnessing political violence firsthand, was one of many elected and appointed officials across the US to condemn the expression of white racial supremacy, according to the South China Morning Post.

"Violent acts of hate and bigotry have no place in America," Feinstein said, adding, "Violence like this will solve nothing and will only beget more violence and sow more division."

Hundreds gathered in the northern California city of Oakland to refute racism and violence on Saturday evening.

Additional spontaneous protests are said to be either ongoing or planned for New York City, Boston, Philadelphia, and San Francisco, as well as in the states of Washington and Maryland.

Local police responding to requests for more information asserted that the rallies have been peaceful and that there have been no arrests.

000000
Popular comments
Those in the USA who are now saying "No Fascist SCUMS (in the US)" are the same who have been supporting the same "Fascist SCUMS" in what used to be Ukraine. Let the boomerang return home?
jameskees
13 August 2017, 23:36 GMT4
000000
Apocalypse now ! All those people that like to talk about or differences all the time have done a swell job. Thats how any ruling elite works: when everybody else is busy with somebody else, they can can go and collect all the money. Fairly simple thing, happens to work. So who is screwing you over ? caucasian, african, asian, homosexual, old, young, disabled...No, none of them. They just keep them in press to promote differences in society, that makes it easier for the elite to stuff their pockets.