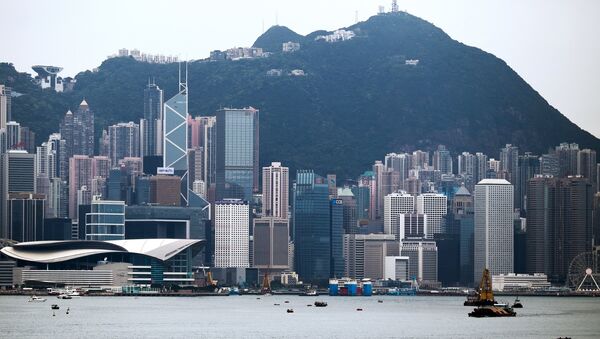 © Sputnik / Alexander Vilf
/
Go to the mediabank
Subscribe
International
India
Africa
No more official tidings from the West, as Hong Kong will soon replace the BBC with state-run news programming, after continuously relaying the venerable World Service for 39 years.

After ending 99 years as a British colony in 1997 and spending the ensuing 20 years morphing into a People's Republic of China city, local Hong Kong government has taken the transition one step further by replacing the legacy BBC World Service broadcasts with news programming authorized by Beijing.

In a move stated to 'enhance cultural exchange' between the storied Asian city-state and a less progressive mainland China, the public broadcasting network of Hong Kong will cease its airing of the 24-hour BBC World Service news channel, and replace it with programming crafted by the central Communist Party of China, according to The Independent.

Beginning on September 4, Radio Television Hong Kong (RTHK) will shutter the eminent British news program, and will instead transmit only the China National Radio Hong Kong Edition, a state-run programming network that includes news in Mandarin.

An official arm of the Chinese government, RTHK claimed in a statement that the changes was also timed to coincide with the September end of its Digital Audio Broadcasting (DAB) service.

Announcing in March that all digital channels would be shuttered, Beijing has asserted that the internet has replaced traditional broadcast delivery methods.

Governed under Beijing's "one country, two systems" principle, the Hong Kong city state is provided with a comparatively high level of legislative autonomy, but remains under the threat of veto at any moment.

According to reports, over half of Hong Kong media owners are involved in Chinese politics, indicating that they are reluctant to counter the Beijing party line.