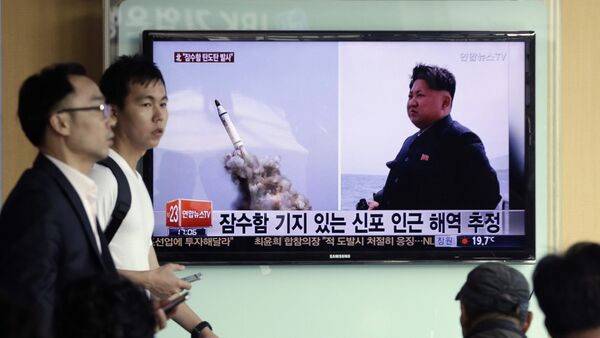 Pepe Escobar
All materials
Amid the thick fog of (rhetorical) war between Washington and Pyongyang, it’s still possible to detect some fascinating writing on the (unbuilt) wall.

A case can be made that President Trump is using North Korea to kick the 24/7 Russia-gate narrative out of the US news cycle. It's certainly working. After all, in Exceptionalistan weltanschauung, the prospect of war and its possible rewards certainly trumps hazy accusations of Russian hacking and election interference.

Capitol Hill would never even consider an attempt to impeach a president — on top if it surrounded by generals — while American geopolitical primacy is in danger. Besides, Congress has already made it explicit Trump does not even need permission to bomb North Korea.

So, according to this working hypothesis, if Robert Mueller finds anything seriously damaging to the Trump brand, the president might actually consider a bomb North Korea/wag the dog operation.

Meanwhile, anybody paying attention to what Edward Snowden has disclosed in detail knows hackers of all persuasions are fine tuned to all Mueller-related IT systems and cell phone communications. They will know what Team Mueller has managed to find on Trump in real time — and plan their contingencies accordingly.

South Korean Presidential Adviser Urges US, North Korea to Start New Dialogue
As for the rhetorical war itself, a US intel source used to thinking outside the Beltway box points to the crucial variable, South Korea; "South Korea will not maintain its alliance with the US the day they believe that the US will attack North Korea to protect itself at the expense of the death of thirty million people in South Korea. South Korea is in secret talks with China for a major security treaty because of the US position that they will bomb North Korea in their own defense irrespective of the destruction of South Korea which the US would regard as most unfortunate."

Don't expect to read about these secret Beijing-Seoul talks on Western corporate media. And that's only part of the equation. The source adds, "there are secret talks between Germany and Russia over the US joint sanctions against those two nations and a realignment of the German position back to the Bismarckian Ostpolitik of a new Reinsurance Treaty with Russia."

Assuming these secret negotiations bear fruit, the consequences will be nothing short of cataclysmic; "The European and Asian security systems of the United States may be about to collapse due to the turmoil in Washington which is unhinging all of the United States alliances. As Congress undermines Donald Trump, the United States is presently jeopardizing all its major strategic relationships."

Guam Homeland Security Warns N Korea Missiles Would Reach Island in 14 Minutes
Meanwhile, serious questions remain over North Korea's true military capabilities. As an independent Asia intel source familiar with the Korean peninsula observes, "submarine launched ballistic missiles (SLBMs) as well as land-based nuclear missiles are available on the black market, so North Korea would have no trouble acquiring them. North Korea knows that if they do not have a nuclear deterrent capacity they could be subject to a similar destruction that occurred with Iraq and Libya. In addition, the irresponsible threats against North Korea by [US Secretary of State] Tillerson, who should retire to his fishing haunts, could do grave damage to the US, for if North Korea believes the US will strike they will not wait as Saddam Hussein, having learned their lesson from that, but they will strike first."

So the real issue, once again, is whether Pyongyang already is in possession of SLBMs as well as land-based nuclear capacity, acquired through the black market. The Asia intel source adds, "North Korea presently has twenty Romeo class submarines which, according to Heritage expert Bruce Klingner, have the capacity to carry nuclear SLBMs. These Romeo class submarines have a range of 9,000 miles and the distance from Pyongyang to New York City is 6,783 miles. These submarines could be refueled, for instance, in Cuba, Therefore, it is not inconceivable to find a North Korean submarine offshore New York City equipped with a ballistic nuclear missile in a showdown at the O.K. Corral with Washington D.C."

US Think Tankland is developing a creepy consensus when it comes to North Korea. Every analyst worth his paycheck knows that North Korea's nuclear program sites are widely dispersed and ultra-reinforced; everyone also knows that devastating North Korea artillery is concentrated near the demilitarized zone (DMZ) within striking distance of Seoul. Still, this is all being spun as part of an aseptic narrative where the US is "extremely reluctant" to bomb.

It's obviously hard for CIA types to publicly acknowledge that Pyongyang is — successfully — creating the framework for a new brand of negotiation with the US as well as with South Korea, China and Russia. Any rational, non-Dr. Strangelove intellect knows there is no military solution to this drama. North Korea is already a de facto nuclear power — and diplomacy will have to take it into account.

Neocon/neoliberalcon War Party/CIA types though bet on — what else — war. And fast — before the much-hyped point of no return when Pyongyang acquires a deliverable nuclear weapon. That's where, predictably, most factions of the deep state converge with Trump. And that's the stuff of all sorts of chilling scenarios, pointing once again to Washington having no qualms sacrificing its South Korean "ally".

What the Deep State Really Wants

Washington Needs to Show 'US Not Seeking to Attack North Korea'
For all the intractable problems affecting the Korean peninsula, independent analysts have also been considering how the Washington-Pyongyang drama is only a small part of a much larger Big Picture; the American subjugation of international relations based on their dependence of what is extracted from the rest of the world in the form of dollar debt.

Washington uses the usual tools — sanctions and bombs — to enforce dollar-denominated global trade and energy trade. China has counter-attacked with everything from the biggest "win-win" trade/ infrastructure project of the 21st century — the Belt and Road Initiative (BRI) — to buying energy in yuan; call it a mighty counterpunch against the infernal US debt machine. Russia for its part has fully re-emerged as a prime geopolitical/military power.

The Brzezinski doctrine — to prevent the emergence of any peer competitor, not to mention an alliance of peer competitors such as the Russia-China strategic partnership — is collapsing all over. Nuclear North Korea is just the latest visible sign of the collapse. It's as if with voting in favor of the latest sanctions package at the UNSC, Russia-China have allowed a double dare (and they sure knew in advance the rhetorical war would escalate).

The cumulative effect, for all the world to see, is Washington regime change obsession (Iran, Venezuela, etc.) and illegal trade sanctions (Russia, Iran, North Korea, etc.) run amok, while Russia-China subtly keep undermining both Washington's supply chain — as in dollar debt — and military enforcement (bomb North Korea if you dare). So it's no wonder Russia-China, as far as the North Korea drama is concerned, are all for diplomacy, while the exceptionalist US deep state craves war.