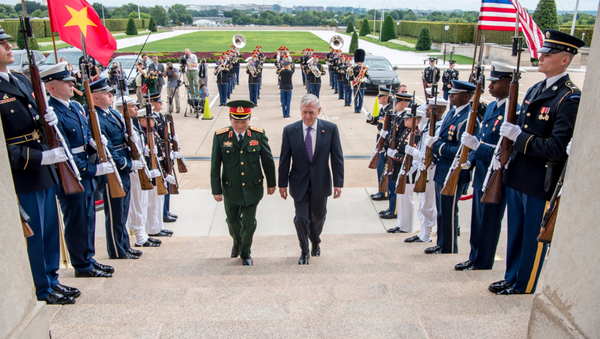 During the recent meeting between Vietnamese Defense Minister Ngo Xuan Lich and his US counterpart James Mattis, the two defense leaders agreed to deepen mutual military cooperation. Speaking to Sputnik Grigory Lokshin explained what lies at the heart of US-Vietnamese rapprochement.

Although the last time a US aircraft carrier visited Vietnam's shores was when it participated in the evacuation of American advisers and supporters of the Saigon government in spring 1975, today Hanoi regards the US as one of its most important partners.

"Vietnam has won the promise of a visit from a US aircraft carrier and deeper defense cooperation from the United States as strains show with China over the disputed the South China Sea," Reuters reported commenting on the recent meeting between Vietnamese Defense Minister Ngo Xuan Lich and US Defense Secretary James Mattis.

For its part, the US Department of Defense press release says that the US-Vietnam military cooperation "promotes regional and global security" and is "based on mutual respect and common interests, including the freedom of navigation in the South China Sea."

South China Sea Chess: US Aircraft Carrier To Visit Hanoi in 2018
Speaking to Sputnik Vietnam, Grigory Lokshin from the Institute of Far Eastern Studies (IFES) of the Russian Academy of Sciences, emphasized that the bolstered US-Vietnamese cooperation should be seen through the prism of the relationship between Hanoi and Beijing.

"China is tightening its territorial requirements, claiming 80 percent of the maritime area. Thus, the interest of Vietnam, which is protecting its sovereignty and territorial integrity, to some extent coincide with the interests of the United States, which entered into a serious confrontation with China over the region several years ago."

"For Vietnam, each step towards rapprochement with the US is, first and foremost, a warning signal to China," he emphasized. 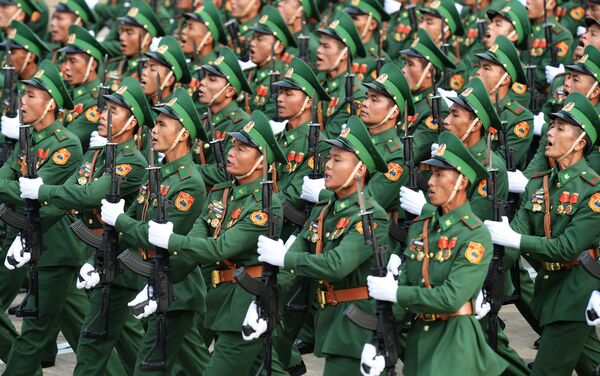 According to the expert, the forthcoming visit of a US aircraft carrier to the Cam Ranh Bay should be regarded in the same context.

"During the last few years, Vietnam permits the entry into Cam Ranh to one large warship, belonging either to the US or China, per year. The very fact of their visits demonstrates that Vietnam does not intend to provide anyone with military bases in Cam Ranh — this is part of its policy of protecting sovereignty and independence," Lokshin explained.

The expert noted that one shouldn't exaggerate the significance of the new military and technical assistance to Vietnam on the part of the US. He pointed out that it doesn't mean that US-made weaponry will now flood into Vietnam.

"No, it will not, because it is expensive, and because Vietnam has another reliable supplier — Russia," Lokshin highlighted, adding that 90 percent of the weapons acquired by Vietnam are of Russian origin.

Needless to say, the strengthening of the Vietnamese national defense including the US military assistance prompts Beijing's concerns. However, what China is doing in the South China Sea in its turn is making Hanoi uneasy.

To complicate matters further, recently China has suspended military negotiations with Vietnam, while during the latest ASEAN summit the head of the Chinese Foreign Ministry refused to meet with his Vietnamese counterpart.

In response, Vietnam has signaled that it won't succumb to this pressure.

How Distorted Intelligence Dragged US Into Vietnam War 53 Years Ago
In his interview with Sputnik, Lieutenant-General Le Phuc Nguyen of the People's Army of Vietnam said that Vietnam's military cooperation with other countries is chiefly aimed at maintaining peace in the region.

"The latest trip of our Defense Minister [Ngo Xuan Lich] to the United States is a logical continuation of those visits which our previous ministers paid to [Washington]. This is a reflection of Vietnam's foreign and defense policies aimed at developing a military-technical partnership with all countries interested in maintaining peace. Vietnam supports military-technical cooperation with all countries, primarily with the members of the UN Security Council," he told Sputnik.

"The results of the recent trip show that Vietnam's cooperation with the United States, including that in the military-technical sphere, has good prospects since the new US administration continues to follow the strategy of the previous leadership with regard to our country," the Vietnamese lieutenant-general underscored.

"I believe that this [cooperation] is beneficial for our countries and contributes to the maintenance of peace in the region and throughout the world," Lt.-Gen. Le Phuc Nguyen said.