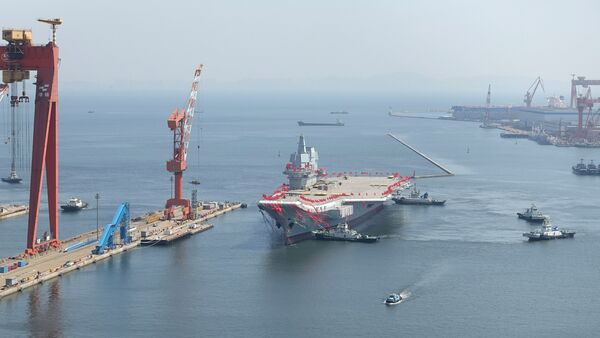 Chinese military analysts say that advances and progress with the power generators for its Type 001A aircraft carrier place the massive ship ahead of schedule prior to its first deployment.

Type 001A could join the People’s Liberation Army Navy (PLA-N) by the end of 2018 or perhaps 2019, according to the South China Morning Post’s report on Monday. The Washington-based Center for Strategic and International Studies previously estimated the carrier wouldn’t join the rest of the navy until 2020.

Before the Type 001A joins the active duty fleet, "we also need to a do a variety of systematic tests [at sea], including matching tests of carrier-based aircraft, weapons systems, and others," the Type 001A’s project manager told SCMP.

The carrier will rely primarily on steam generators to power ot over long distances. Construction on the carrier was finished in April, when it made its first launch into the open sea, and took just five years and three months to complete. Rebuilding the Soviet-made Liaoning (originally the Kuznetsov-class carrier Varyag), PLA-N’s only other carrier, is believed to have given the Chinese important lessons in building the massive ships, which are vital for long-range maritime expeditionary capabilities.

Deploying the Type 001A would be a major boost to a navy that is still in the early stages of learning how to conduct carrier operations. In particular, aircraft takeoff and landing can prove problematic even for naval crews with decades of experience. According to Andrew Erickson, associate professor at the US Naval War College’s China Maritime Studies Institute, “already with China’s so-called starter carrier, Liaoning, there is significant potential in the near future to take it overseas for some basic naval diplomacy … and this will already have tremendous symbolic and psychological effects.”

It’s worth noting that the Chinese carrier will be propelled by eight steam turbines getting their power from diesel generators. The PLA-N just last week commissioned its largest-ever resupply ship, which has hoses for refueling Chinese carriers.

The US Navy’s 10 Nimitz-class carriers, first commissioned in 1975, are all powered by nuclear propulsion, but the first nuclear-powered carrier, the USS Enterprise, was actually decommissioned in February. Using a nuclear power source allows the ships to operate at sea continuously for up to 20 years without refueling.