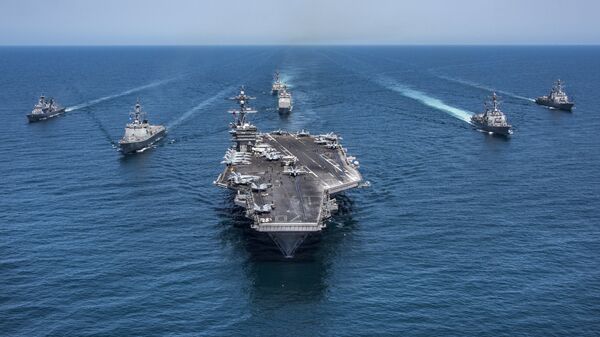 The US Navy may be sending two Nimitz-class supercarriers to the waters surrounding the Korean Peninsula in response to North Korea’s ballistic missile tests.

South Korean military officials reportedly said the USS Ronald Reagan and USS Carl Vinson were being considered for deployment to the region. The Pentagon did not reply to a request from Sputnik News confirming or denying the veracity of the South Korean defense officials’ comments.

The carriers would be typical participants in frequently held war games near North Korea and China, however Pentagon officials are reportedly mulling whether or not to fast-track the massive ships as part of a forward deployment.

Defense Secretary James Mattis said the Vinson was en route to the Korean Peninsula back in April. US Navy officials quickly rejected the notion and were awestruck the Pentagon chief had made such a statement. A few days after Mattis’ comments the aircraft carrier was photographed transiting the Sunda Strait, a waterway connecting the Indian Ocean and Java Sea. In fact the carrier was at least four to five days from reaching the peninsula.

Yonhap News Agency previously reported that the USS Nimitz and the USS Ronald Reagan were slated to join the USS Carl Vinson, but those reports turned out to be wrong. The Reagan was receiving repairs in Japan and the Nimitz was floating around South California, Sputnik reported.

US President Donald Trump, in the same vein as his top national security cabinet member,  falsely explained in April that a carrier strike group was destined to the Yellow Sea or Sea of Japan. “I think there is every possibility that it was an intentional misdirection, an intentional display meant for North Korea’s perception, possibly China’s as well, but I think most importantly it was meant for the US domestic public,” analyst Mark Sleboda told Radio Sputnik’s Loud & Clear.