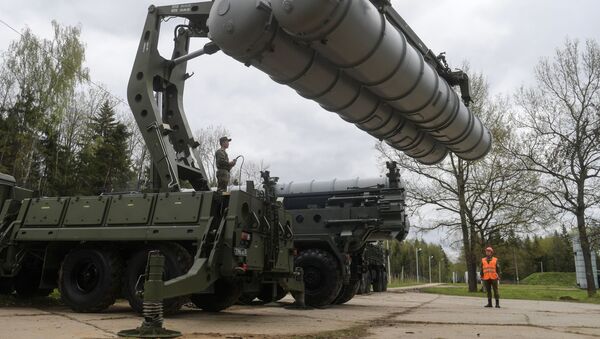 © Sputnik / Grigoriy Sisoev
Subscribe
International
India
Africa
Russia and Turkey are currently at the final stage of negotiations regarding the delivery of the Russian-made S-400 missile defense systems to Ankara. The US signaled that Turkey buying the missiles would become a major concern for Washington.

Turkish military expert Turan Oguz told Anadolu news agency that Turkey's purchase of S-400 air defense missile systems from Russia does not mean Turkey's opposition to NATO or its withdrawal from the alliance, but it does seem like Ankara seeks to ease its dependence on the alliance in the military sphere.

Turkey Needs Russian S-400 System as Shield Against 'Western Plan' in Mideast
Speaking on the eve of a meeting of the parliamentary faction of the ruling Justice and Development Party in Ankara, Turkish President Tayyip Erdogan announced the signing of documents with Russia on the delivery of the S-400 missile defense systems.

Following the announcement the Pentagon chief, James Mattis, said that the possible deal raises questions about the technical and operational compatibility of the S-400 with NATO’s standards and Turkey would have to explain for itself the choice of the Russian-made weapon.

"If Turkey decides to leave NATO in the future, at least it will not seem to be impossible militarily. That is what Ankara aims at," Oguz told Anadolu in a comment.

He noted that the advantages of the S-400 systems are greater than the shortcomings, and their purchase is a forced measure aimed at covering the country's needs in the foreseeable future.

Oguz also commented on the statements of the US authorities, which in recent days have expressed concern about the purchase of the S-400 by Ankara.

"It is interesting that there are fewer objections to the purchase of Russian anti-missile systems than when Ankara discussed the purchase of the Chinese FD-2000 air defense system. I think that after Turkey declares the development of a national HISAR [surface-to-air missile system] in the future, the discontent will increase. The reason for that is simple: Turkey is moving beyond the ‘permissible,’” Oguz said.

Money Talks: Why US Concerned Over Russia-Turkey S-400 Deal
The expert further said that the S-400 would be produced in Russia and delivered to Turkey.

Turkey will not contribute to the production of the S-400, but the specialists from Russia will come and train the local Turkish personnel to operate the complex, “thus, for the first time Turkey will gain experience in using long-range SAM [surface-to-air] systems not manufactured in a NATO country and we will be able to use this experience in the future for maintenance of national systems,” Oguz said.

The negotiations on the matter between Russia and Turkey have taken place since 2016. In March, Sergei Chemezov, CEO of Russia’s Rostec Corporation, said Ankara was ready to buy the S-400 systems with a loan granted by Moscow.

The S-400 Triumph is a next-generation mobile surface-to-air missile system that can carry three different types of missiles capable of destroying aerial targets at a short to extremely long range. It is designed to track and destroy various types of aerial targets, from reconnaissance aircraft to ballistic missiles.