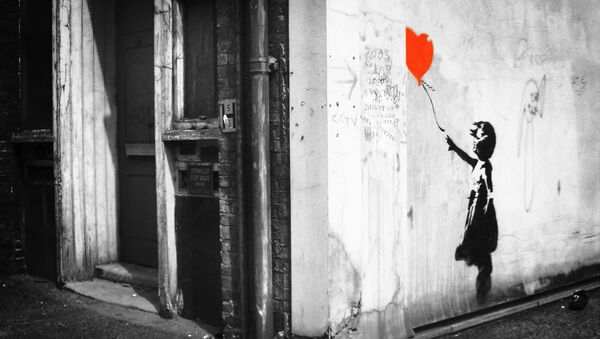 CC0 / Stew Dean / Banksy: Balloon Girl. Vestry Street
Subscribe
Graffiti artist Banksy has proven to be more popular than Turner and Constable in a poll of the nation’s favorite artworks. His Balloon Girl, which was daubed on a wall outside a shop in Shoreditch, east London, came top of a list of British art.

The image shows a little girl watching as her heart-shaped red balloon flies away on a windy day.

Various versions of the stencil by the Bristol-based artist appeared in 2002.

The picture is now available on prints, greeting cards and mugs and pop star Justin Bieber also has a tattoo of the image on his arm.

Another of Banksy's works, a mural showing a painter chipping away at the European Union flag, was recently vandalized in Dover. 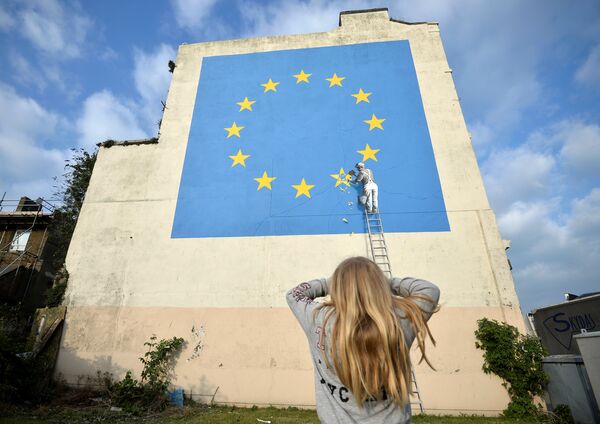 A young girl looks at artwork attributed to street artist Banksy, depicting a workman chipping away at one of the 12 stars on the European Union, seen on a wall in the ferry port of Dover, Britain, May 7, 2017.
© REUTERS / HANNAH MCKAY

The Girl With The Balloon pipped a more traditional painting — Constable's 1821 masterpiece The Haywain — in a survey of 2,000 people.

John’s Constable's ‘The Haywain’ has been voted No 2 as the nation's favourite artwork. Constable went to school in Dedham Essex. pic.twitter.com/OxUbVxZaF4

The Singing Butler, painted in 1992 by Scottish artist Jack Vettriano, was the third most popular work of art.

The Singing Butler by Jack Vettriano has been voted one of Britain's greatest ever works of art: https://t.co/FsWDqfjHKd @TheScotsman pic.twitter.com/a4Q9qBFLfO

The survey, which was commissioned for the launch of a Samsung television that camouflages itself as a work of art when it is switched off, also found one in five people admitted they hid or removed pictures in their own home when certain opinionated guests visited.

The top five also included J M W Turner's 1839 work The Fighting Temeraire, and Antony Gormley's 1998 sculpture The Angel Of The North, which stands beside the A1 near Newcastle-upon-Tyne.

Did you know? The Angel of the North is viewed by one person every second (That’s 90,000 people a day — or 34m every year) pic.twitter.com/C2OlTPgtZT

The Temeraire was one of Nelson's ships at the Battle of Trafalgar in 1805 and the oil painting shows it being towed by a steam tug to a scrapyard in 1838.

"The painting was thought to represent the decline of Britain's naval power," according to the National Gallery in London, where it is displayed.

Also on the list are several album covers, including The Beatles' Sergeant Pepper album, by Peter Blake; Pink Floyd's Dark Side of The Moon, by George Hardie and the Sex Pistols' Never Mind The Bollocks by Jamie Reid. 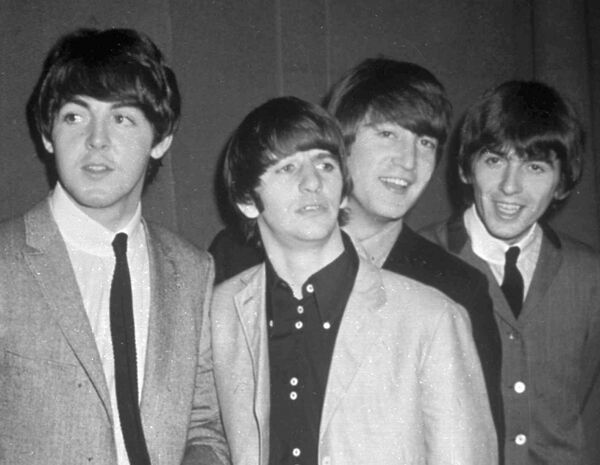 David Hockney's famous 1960s pop art painting, A Bigger Splash, also makes the list, as does Anish Kapoor's art installation Orbit, which was built next door to the Olympic Stadium in London before the 2012 Olympiad.

Famous British painters George Stubbs, Thomas Gainsborough and John Everett Millais also made it onto the list with, respectfully, Mares and Foals, Mr. and Mrs. Andrews and Ophelia.

There is also a place on the list for avant garde sculptor Henry Moore's Reclining Figure, which was first cast in lead in 1939 and is now housed at the Tate Modern.

Lesser known artists on the list include Scottish sculptor Andy Goldsworthy's Balanced Rock Misty, Bridget Riley's monochrome Movement in Squares, and Scallop, a sculpture by Maggi Hambling which sits on the beach at Aldeburgh in Suffolk.

The most recent work on the list is another bit of graffiti.

A Couple Hold Hands In The Street, stenciled by Stik on a door at a mosque in Brick Lane, east London in 2010, depicts a woman in a burka with her boyfriend.

"I was really nervous about doing it, because there had just been an attempted assassination of a cartoonist who had depicted Mohammed somewhere in Sweden," said the artist.