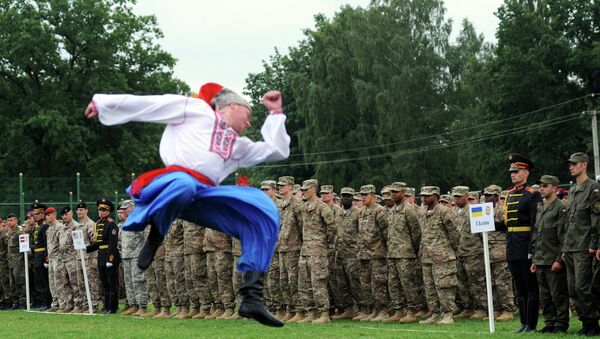 © AFP 2021 / YURIY DYACHYSHYN
Subscribe
The US military is working on requirements for inventory of lethal defense weapons that could be supplied to Ukraine, Vice Chairman of the Joint Chiefs of Staff Gen. Paul Selva said in a congressional hearing on Tuesday.

McCain Calls on Trump to Provide Ukraine With Lethal Weapons
WASHINGTON, (Sputnik) — In September 2016, the US House of Representatives approved legislation to allow the supply of lethal "defensive" weapons to Ukraine, but the law still needs to be approved by the US Senate and signed by the US president.

Russian officials have repeatedly warned against arms deliveries to Ukraine, stressing that it would only escalate the situation in the eastern part of the country. Different European politicians, including German President Frank-Walter Steinmeier, as well as NATO Military Committee Chairman Peter Pavel have also spoken against arms deliveries to Ukraine.

"We are working very closely between the Joint Staff and the US European Command to actually put requirements on the table for an inventory of what that lethal defensive aid might look like," Selva told the US Senate Armed Services Committee.

"It will be more than just a military recommendation. This will be a policy choice."

US Must Consider Providing Lethal Weapons to Ukraine - European Command Chief
The US European Command and the Joint Chiefs of Staff will assess the types of defensive lethal weapons for Ukraine and will make recommendations to the US government in the coming months, Selva added.

"Sir, these discussions are ongoing so I think in the coming months you will have a decision on an answer to that question. But we have advocated for lethal means such as anti-tank weapons, not tanks but defensive weapons."

US Senator John McCain, who heads the Senate Armed Services Committee, has repeatedly called for sending anti-tank missiles and other military equipment to Ukrainian forces.

000000
Popular comments
Ukraine is just too overrated. Giving them lethal defense aid will bring them more harm than help. Their two intelligence officers died after explosions – one because he activated a live explosive device when he was showing it to some soldiers and the second one transported explosives in his car... Ukrainian nationalists accused US of bad military drill of these officers... See the proof, bukpravda.cv.ua/blogy/entry/2017-07-15-10-28-16.html So I think Ukrainians simply not smart enough to get the lethal defense aid and I really doubt any training will help them to use everything properly.
Brian Adams
19 July 2017, 16:09 GMT
000000
Newsfeed
0
New firstOld first
loader
LIVE
Заголовок открываемого материала
Access to the chat has been blocked for violating the rules . You will be able to participate again through:∞. If you do not agree with the blocking, please use the feedback form
The discussion is closed. You can participate in the discussion within 24 hours after the publication of the article.
To participate in the discussion
log in or register
loader
Chats
Заголовок открываемого материала
Worldwide
InternationalEnglishEnglishMundoEspañolSpanish
Europe
DeutschlandDeutschGermanFranceFrançaisFrenchΕλλάδαΕλληνικάGreekItaliaItalianoItalianČeská republikaČeštinaCzechPolskaPolskiPolishСрбиjаСрпскиSerbianLatvijaLatviešuLatvianLietuvaLietuviųLithuanianMoldovaMoldoveneascăMoldavianБеларусьБеларускiBelarusian
Transcaucasia
ԱրմենիաՀայերենArmenianАҧсныАҧсышәалаAbkhazХуссар ИрыстонИронауОssetianსაქართველოქართულიGeorgianAzərbaycanАzərbaycancaAzerbaijani
Middle East
Sputnik عربيArabicArabicTürkiyeTürkçeTurkishSputnik ایرانPersianPersianSputnik افغانستانDariDari
Central Asia
ҚазақстанҚазақ тіліKazakhКыргызстанКыргызчаKyrgyzOʻzbekistonЎзбекчаUzbekТоҷикистонТоҷикӣTajik
East & Southeast Asia
Việt NamTiếng ViệtVietnamese日本日本語Japanese中国中文Chinese
South America
BrasilPortuguêsPortuguese
NewsfeedBreaking
04:25 GMTExplosion Reportedly Hits Bus in Damascus, Syria - Photos, Video
04:03 GMTTime's Up, Jeffrey: New Documentary Shows Epstein Claiming to Support Anti-Harassment Movement
02:49 GMTBuilding 'Metaverse': Facebook Plans to Change Its Name Next Week - Report
02:42 GMTPhoto: Texas Gov. Mocks Illegal Immigrants Trying to Cross the Border in Camouflage
02:27 GMTAlyssa Milano Arrested at Protest Outside White House for Refusing to Obey Police
02:05 GMTFBI Agents Leave House of Deripaska's Relatives in Washington, Correspondent Says
01:41 GMTEcuador President Declares State of Emergency Amid Rise in Violent Crime
00:57 GMTUS Law Enforcement Unions Decry 'Defund the Police' for Rise in Assaults on Officers - Report
00:52 GMTLabor Activists Hail ‘Striketober’ as Over 100,000 Union Workers Across US Prepare Work Stoppages
00:46 GMTUS House Committee Advances Resolution Calling for Criminal Contempt Charge Against Bannon
00:38 GMT'Ye' Surprises Yet Again: Users Mock Rapper's New Haircut
00:19 GMTBiden Admin. Not Seeking to Make States Choose Between Working With US or China, Blinken Says
YesterdayCENTCOM Chief, UAE Defense Brass Talk Keeping Pressure on Daesh in Iraq, Syria
YesterdayPhotographer Claims He Filmed Aliens Neutralizing Nuclear Missile Mid-Air - Report
YesterdayUS Senate Panel Advances Bill to Impose Sanctions Tied to South China Sea Issues
YesterdayOver Three-Fourths of US Republicans Want Trump to Run for President in 2024 - Poll
YesterdayBrazil's Senate Accuses Bolsonaro of Mass Homicide as Herd Immunity Policy Fails - Reports
YesterdayItalian Senate Bans Parliamentarians From Working Without Green Pass
YesterdayMalaysia’s Transgender Tycoon Nur Sajat Granted Asylum in Australia From Blasphemy Charges
YesterdayAll Clear After Bomb Threat Issued at US Department of Labor in DC Over 'Suspicious Package'