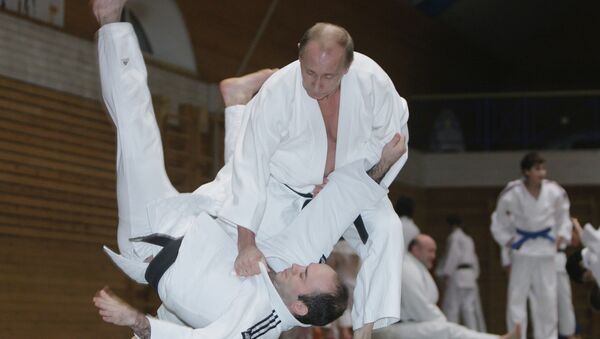 © Sputnik / Alexei Druzhinin
/
Go to the photo bank
Subscribe
NATO is getting closer and closer to Russia’s borders, deploying even more sizeable armed forces than Hitler did around the USSR during the Second World War. However President Putin knows very well how to respond. Being a master of judo, he is just biding his time, according to Serbian filmmaker Emir Kusturica in an interview with Sputnik.

US House Passes Measure Requiring Reports on Russia-Serbia Military Cooperation
The US has recently demanded a report on military cooperation between Russia and Serbia. The move, according to a senior member of the Foreign Affairs Committee of the House of Representatives Eliot Engel, "is part of the National Defense Act 2018."

The congressman explained that the US must carefully analyze Russian-Serbian military ties and assess their consequences for the US national security policy and Serbia’s membership in the NATO Partnership for Peace, as well as the consequences for Serbia’s neighbors.

He said that Russia has recently donated to Serbia $600 million worth of weapons, including six MIG-29 "Fulcrum" combat aircraft, 30 tanks and 30 BRDM-2 armored reconnaissance vehicles.

“Frankly, I am more and more concerned about the choices Belgrade makes when it comes to military and security issues. Which is why I wrote today’s amendment,” Engel said on Friday.

Commenting on the US demand, Serbian filmmaker, actor and musician Emir Kusturica told Sputnik Serbia that "the whole world is aware that there are a lot more serious armed forces stationed on Russia's borders than those of Adolf Hitler back in the years of the Second World War."

Filmmaker Kusturica Says Serbs Feel Respect With Putin in Power in Russia
"Unlike the darkness we were living in at that time, now, thanks to the mass media, we are now able to see clearly what is going on. However lack of necessary information prevents us from making any conclusions, we simply don't know enough. We know how many units are deployed along Russia's border but we don't know what the purpose is. Nobody tells us what the intention is," the filmmaker told Sputnik.

"However I think Vladimir Putin knows how to respond: his strategy is the strategy of a judo master, who is able to use the force of another person to his own advantage," he said.

While commenting on the potential risk of a military confrontation between Russia and the alliance, Emir Kusturica said that Russia has always been a strong country. Military analysts however suggest that if any conflict breaks out, it won't be on Russian territory, but somewhere else in the world.

000000
Popular comments
Military analysts however suggest that if any conflict breaks out, it won't be on Russian territory, but somewhere else in the world. Poor stupid Nato, Putin is prepared to fight and has told you any war will not be fought on Russian soil again.. You should all be very concerned you will get your ass kicked if you start messing with the Russians. I think that America is in considerable danger from its idiot leadership. EH
leyshon9
17 July 2017, 17:00 GMT3
000000
SNAKO has been nudging Russia & China to do something so as to justify war.. ... When the time comes, Russia could issue a broad warning against ships whom imperil Russia, and/or areas - where they've not been invited - by say Syria -- To move away and/or if sailors, leave ship .. or else! IF NOT? Someone(s) become an unfortunate example for all the rest. .... Also? Allow one non-allowed plane to enter into Russian-Defended territory.
MichaelAngelus
17 July 2017, 17:17 GMT
000000
Newsfeed
0
New firstOld first
loader
LIVE
Заголовок открываемого материала
Access to the chat has been blocked for violating the rules . You will be able to participate again through:∞. If you do not agree with the blocking, please use the feedback form
The discussion is closed. You can participate in the discussion within 24 hours after the publication of the article.
To participate in the discussion
log in or register
loader
Chats
Заголовок открываемого материала
Worldwide
InternationalEnglishEnglishMundoEspañolSpanish
Europe
DeutschlandDeutschGermanFranceFrançaisFrenchΕλλάδαΕλληνικάGreekItaliaItalianoItalianČeská republikaČeštinaCzechPolskaPolskiPolishСрбиjаСрпскиSerbianLatvijaLatviešuLatvianLietuvaLietuviųLithuanianMoldovaMoldoveneascăMoldavianБеларусьБеларускiBelarusian
Transcaucasia
ԱրմենիաՀայերենArmenianАҧсныАҧсышәалаAbkhazХуссар ИрыстонИронауОssetianსაქართველოქართულიGeorgianAzərbaycanАzərbaycancaAzerbaijani
Middle East
Sputnik عربيArabicArabicTürkiyeTürkçeTurkishSputnik ایرانPersianPersianSputnik افغانستانDariDari
Central Asia
ҚазақстанҚазақ тіліKazakhКыргызстанКыргызчаKyrgyzOʻzbekistonЎзбекчаUzbekТоҷикистонТоҷикӣTajik
East & Southeast Asia
Việt NamTiếng ViệtVietnamese日本日本語Japanese中国中文Chinese
South America
BrasilPortuguêsPortuguese
NewsfeedBreaking
20:37 GMTBiden Says Concerned About Chinese Hypersonic Missiles After Alleged Test, Reporter Claims
20:36 GMTRicky Gervais Hopes to See 'Woke' Generation Shunned by the Next
20:16 GMTWHO Confirms Consideration of Sputnik V Entering Final Stage
19:46 GMTIran Prepares for Nationwide Air Drills After Israel Ok’s Special Strike Budget
19:41 GMTUS At-Tanf Base in Syria Attacked With Missiles by 'Iran-Backed Militias', CENTCOM Says
19:37 GMTNew York City’s Largest Police Union Sues Over New COVID Vaccine Mandate
19:35 GMTHeightened Inflation, Wages Impact Felt by Most US Businesses, Fed Beige Book Report Says
19:23 GMTBrian Laundrie Search: Coroner Called After Items Belonging to Laundrie Were Found
19:05 GMTFacebook Admits It Doesn't Ban Info Facilitating Illegal Immigration, Smuggling
18:58 GMTPoll: Support for Capitol Riot Probe Declines Among Republicans, Independents
18:55 GMTUS House Rules Committee Approves Bannon's Criminal Contempt Referral, Sets Up Full Vote
18:52 GMTUS House Lawmakers Introduce Bill to Make Human Rights 'Integral Part’ of Arms Sales
18:48 GMTREC: EXIAR Stands Ready to Support Armenia's Infrastructure Projects
18:40 GMT'Who the Hell Shrunk Mike and Why?' Twitter Explodes Over Pompeo's Dramatic Weight Loss
18:30 GMTUkraine NATO Membership: Why US, EU Won't Test Russia's 'Red Lines' Despite Pentagon Chief's Bravado
18:20 GMTREC's Support for Exports to Armenia Amounts to $72 Million Since Early 2021
18:18 GMT'Conspiracy to Malign' Image: India Rejects EU's Claim of Exporting Genetically Modified Rice
18:18 GMTRussian Agency for Export Credit and Investment Insurance Celebrates 10th Anniversary
17:56 GMTNo Offence, Christopher: Vikings Reached New World Long Before Columbus, New Study Claims
17:51 GMTUS Actively Upgrading Tactical Nuclear Arsenal, Russian Defence Minister Says