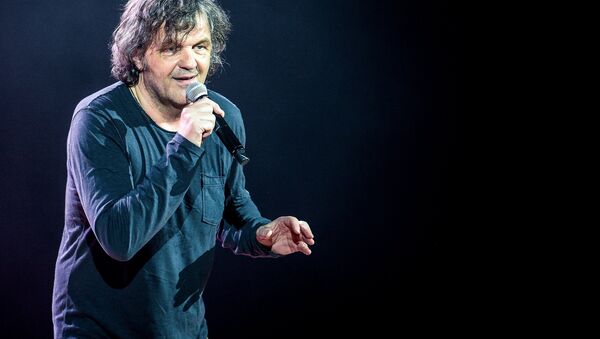 © Sputnik / Vladimir Astapkovich
/
Go to the photo bank
Subscribe
Renowned Serbian film director Emir Kusturica believes that the Serbian people began to feel respect for themselves when Vladimir Putin came to power in Russia, he said in an interview published Saturday.

MOSCOW (Sputnik) — At the same time, Kusturica criticized US President Donald Trump, and France's foreign policy. "Trump is incompetent, he collects nonsense, provokes conspiracies and turn countries against each other," he said, adding that France is also "not innocent".

"He (Putin) is a good man. When he came to power, the Serbian nation began to feel respect for themselves. Today the Western-minded people call him a devil. Lies! He is an honest man," Kusturica said in an interview with the French publication Journal du Dimanche.

Emir Kusturica is a Serbian film director, screenwriter, actor and musician. He repeatedly expressed support to Russian President Vladimir Putin, who awarded him with Order of Friendship in October 2016 for promoting friendship and cooperation between peoples.