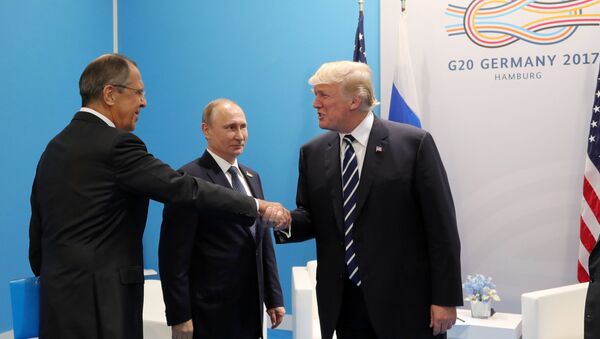 © Sputnik / Michael Klimentyev
/
Go to the mediabank
Subscribe
International
India
Africa
US President Donald Trump at a meeting with Russian President Vladimir Putin on the sidelines of G20 summit fully agreed with the idea of setting up a joint working group on cybersecurity, a source in the Russian Foreign Ministry said Monday.

Kremlin Comments on Trump's Tweets on Russia-US Cybersecurity Group
MOSCOW (Sputnik) — The first meeting between the Russian and the US presidents, Vladimir Putin and Donald Trump, took place on Friday in Hamburg on the sidelines of the G-20 summit, lasting more than two hours. US Secretary of State Rex Tillerson said at the end of the meeting that the two countries would create a working group to develop a framework agreement on cybersecurity and non-interference in each other's affairs.

On Sunday, Trump said on Twitter that he was not sure, whether the joint US-Russian cybersecurity group he discussed with Putin might really be set up.

"Trump, at a meeting with Putin in Hamburg, fully agreed to the creation of a working group on cybersecurity. But you know, we never insist on anything," the source said.

Earlier in the day, Russian presidential spokesman Dmitry Peskov said that the two countries' presidents did not promise anything to each other on this issue, they only said they were ready to work jointly in that direction, adding that Trump's statements on Twitter could not affect Russian President Vladimir Putin's trust in the US leader.