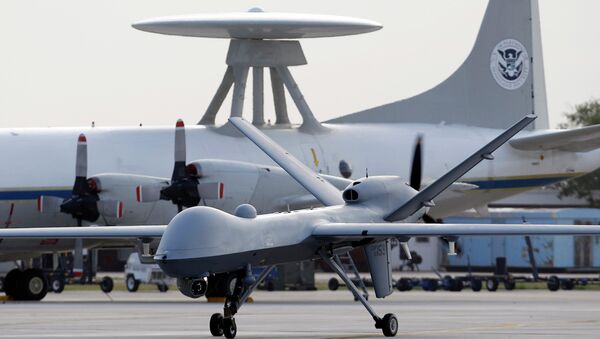 © AP Photo / Eric Gay
Subscribe
International
India
Africa
A arms sale worth more than $2 billion from the United States to India, consisting of 22 naval surveillance drones, has been approved by the Trump White House. The deal still needs to be approved by Congress.

"We are pleased that the US government has cleared the way for the sale of the MQ-9B Guardian to the Indian government," said Linden Blue, CEO of manufacturer General Atomics Aeronautical Systems, in a statement.

The Guardians may be followed by an even bigger sale, according to Vice President Mike Pence. During the 42nd annual leadership summit of the US-India Business Council, Pence said that the US intends to sell both AH-64 Apache attack helicopters and C-17 transport helicopters to India.

This "would increase bilateral defense trade [between India and the United States] to nearly $19 billion, supporting thousands of United States jobs," according to a White House statement.

The US and India also intend to ink the sale of F-16 Fighting Falcon and F/A-18 Hornet fighter aircraft in the future, as part of Modi's push to bolster Indian defense capabilities.

World
US in Process of Approving Sale of Drones, Apache Helicopters to India - Pence

Indian Prime Minister Narendra Modi's visit to the White House on Sunday and Monday was expected to include the negotiation of the sale. Trump indirectly referred to the deal during a Monday news conference, mentioning that it "always makes us feel very good" when other countries purchase military equipment from American manufacturers.

His counterpart Modi said that "the strengthening of India's defense capabilities, with the help of USA, is something that we truly appreciate."

"We have also decided to enhance maritime security cooperation between the two nations. President Trump and I have also spoken about strengthening bilateral defense technology and our trade and manufacturing partnership, which we believe will be mutually beneficial to us," the prime minister added.

The low-key visit from Modi has followed what seems to be the template for foreign leaders visiting the United States under Trump: smiles and compliments in public, shadowed by the war of words that preceded it. Trump has repeatedly complained of the trade deficit between the US and India, which totaled $24.3 billion in 2016. He also slammed India in his speech regarding the US' exit from the Paris Climate Accords.

But on Monday, Trump said that he and Modi "agree on most things, and I would say by the end of the day we'll agree on everything. I have a feeling."