Not Negotiable: North Korea Sticks to Its Guns on Nuclear Weapons 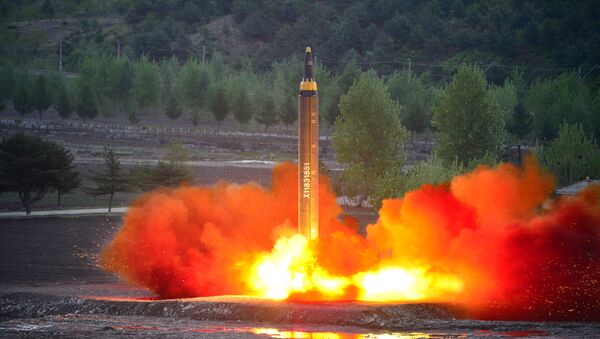 © REUTERS / KCNA
Subscribe
International
India
Africa
Pyongyang has reminded Seoul that its nuclear weapons program will continue, regardless of any diplomatic overtures for peace.

Responding to renewed suggestions from South Korea that the People's Democratic Republic of Korea (DPRK) return to the negotiating table, Pyongyang has warned that its program of nuclear weapons development is not subject to any debate.

In a Sunday editorial published by the state-run Rodong Sinmun newspaper, North Korea promised to continue its development of nuclear weapons and the ballistic missiles necessary to deliver them to any target on the planet, regardless of whether bilateral diplomatic negotiation takes place, according to a report by Yonhap News Agency.

Stating that Seoul and Washington must stop attempting to get Pyongyang to end its nuclear weapons program, the editorial took an offensive tone, asserting the increasingly isolated nation's right to defend itself as it pleases.

"We should make every effort to strengthen our national defense with the nuclear capability as the backbone," the editorial stated.

"Our self-defensive nuclear deterrent force is never subject to any kind of negotiations," the statement added, cited by Yonhap.

The Rodong Sinmun editorial suggested that Seoul turn the tables on Washington, its most powerful ally, in suggesting: "If South Korea truly wants to improve the Korean ties and seek peace, it should stop picking on our nuclear deterrent force and stand against the US's plot for first nuclear strike on the North."

Pyongyang has a long history of asserting its right to use its nuclear weapons program as a means of self-defense against the enormous military force — including the largest nuclear weapons stockpile on Earth — of the US.