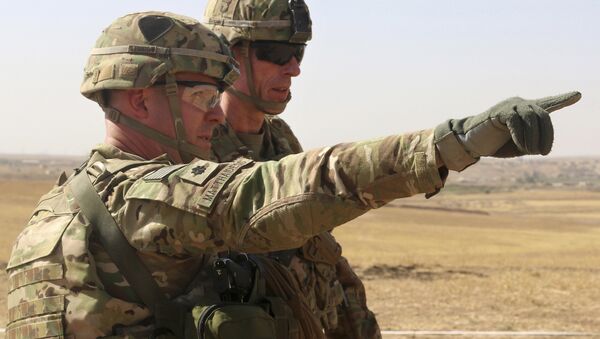 China Should Contribute More to Fighting Terror - US State Dept.
Washington is making attempts to pressure China into sharing the burden of fighting terrorism with the United States, experts told Sputnik; at the same time, US policy makers have a somewhat double-standard approach to Beijing's own terror problem.

On June 21, the US and China kick off the first Diplomatic and Security Dialogue (D&SD) which will bring together the country's senior diplomatic and military officials in Washington.

The United States will be represented by Secretary of State Rex Tillerson and Secretary of Defense Jim Mattis, who will meet with their counterparts, State Councilor Yang Jiechi and Chief of the People's Liberation Army (PLA) Joint Staff Department Gen. Fang Fenghui.

Reportedly, the North Korea issue and the fight against terrorism will become the focus of special attention. It is also expected that the White House will persuade China to adopt a more active approach to the matters.

"Neither side has released any official agenda to date, but issues on the agenda will likely include North Korea's ballistic missile and nuclear program, regional and global terrorism, maritime tensions in the South China Sea, and bilateral military-to-military cooperation," Ankit Panda of Diplomat.com wrote.

US Coalition's Downing of Syrian Jet Shows Who's 'Really Fighting Daesh'
Ahead of the historic meeting, Susan Thornton, acting assistant secretary of state for East Asian and Pacific affairs, said that the US "continue[s] to urge China to exert its unique leverage as North Korea's largest trading partner" and wants Beijing to be more involved in the struggle against Daesh (ISIS/ISIL) in the Middle East.

Speaking to Sputnik China, Azhdar Kurtov of the Russian Institute for Strategic Studies (RISS) pointed out that Washington wants Beijing to share the burden of fighting terrorism in Iraq with the United States.

At the same time, however, Washington intendeds to convince China, by hook or by crook, to play by US rules, Kurtov remarked, adding that the White House doesn't take Beijing's interests and nuances of diplomacy into account.

"The current state of affairs in Iraq was caused by the ill-considered [foreign] policy of the United States," Kurtov told Sputnik. "The implications [of this policy] remain unpredictable. In particular, Iraq is teetering on the brink of splitting into at least two states while a large part of the country is controlled by Daesh [ISIS/ISIL] units."

Given this, Washington is seeking someone who would share this burden with the US, and it appears that the White House views China as the best candidate for this task, the scholar noted.

However, it is unlikely that Beijing will buy into Washington's idea.

"I believe, however, that the Chinese leadership is wise enough to understand what games the US is playing," Kurtov said.

"The US still cannot eliminate Daesh in Iraq by military means. It seems unlikely that other countries will step in to help the US and shoulder the burden of possible combat losses, given the fact that they see how the US military machine is being defeated in the war on terror," the scholar underscored. 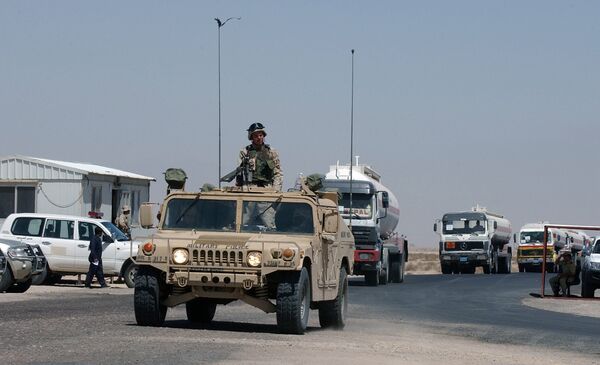 Russian military analyst Vladimir Evseev, the head of the Department of Eurasian Integration and Development of the Shanghai Cooperation Organization (SCO) at the Institute of CIS countries, echoed Kurtov.

Commenting on Thornton's statement, Evseev noted that it appears that the US wants China to pull its chestnuts out of the fire in the Middle East.

"The Americans are trying to shift some of their spending burden for the fight against terrorism to China," Evseev told Sputnik.

The military analyst called attention to the fact that the US sees its war on terror as part of its broader geopolitical plan in the region. Washington still supports various jihadi groups in Syria and it doesn't correspond to the national interests of Russia and China, Evseev noted.

"Therefore, it is unclear how far China is ready to go [to help the US] and whether it will provide such assistance to [Washington]," Evseev highlighted.

White Phosphorus in Syria, Iraq: 'Nothing Will Change' Unless Western Govts Do
While the US and China's vision of the fight against terrorism somewhat differs, Beijing and Moscow's approach to the matter completely coincides, the experts note, citing the fact that the two countries are facing the same terror challenge at home.

To Washington's apparent displeasure, Russo-Chinese counter-terrorism cooperation upsets the US "monopoly" on the "war on terror," including the issue of who could be designated as terrorist and who couldn't be. Furthermore, this collaboration bolsters the position of Moscow and Beijing in the global arena and, in particular, in the Middle East.

Yang Mian, an expert at the Center of International Relations at the Chinese Institute of Communications, emphasized that China and the US may team up to tackle the threat of terrorism  only if the two countries will share a similar approach to this "evil."

"China and the United States are countries which were attacked by terrorists. The US desire to cooperate with China in the field of counter-terrorism could only be welcomed since it is impossible to solve the problem of terrorism single-handedly," Yang told Sputnik.

"At the same time, the US adopted a double-standard approach to the fight against terrorism. For example, the US is looking at the problem of terrorism in China through 'rose-colored glasses' and refuses to recognize its existence," the Chinese expert stressed.

000000
Popular comments
Shush, don't tell Washington their attempts to win China as a firm ally and friend are futile. China knows what that would mean - the expectation of servility and third-class status. Those days are over for China. However, I dare say Beijing will string Washington along whilst business dependencies on the US exist.

triumphant
21 June 2017, 19:28 GMT
000000
Newsfeed
0
New firstOld first
loader
LIVE
Заголовок открываемого материала
Access to the chat has been blocked for violating the rules . You will be able to participate again through:∞. If you do not agree with the blocking, please use the feedback form
The discussion is closed. You can participate in the discussion within 24 hours after the publication of the article.
To participate in the discussion
log in or register
loader
Chats
Заголовок открываемого материала
Worldwide
InternationalEnglishEnglishMundoEspañolSpanish
Europe
DeutschlandDeutschGermanFranceFrançaisFrenchΕλλάδαΕλληνικάGreekItaliaItalianoItalianČeská republikaČeštinaCzechPolskaPolskiPolishСрбиjаСрпскиSerbianLatvijaLatviešuLatvianLietuvaLietuviųLithuanianMoldovaMoldoveneascăMoldavianБеларусьБеларускiBelarusian
Transcaucasia
ԱրմենիաՀայերենArmenianАҧсныАҧсышәалаAbkhazХуссар ИрыстонИронауОssetianსაქართველოქართულიGeorgianAzərbaycanАzərbaycancaAzerbaijani
Middle East
Sputnik عربيArabicArabicTürkiyeTürkçeTurkishSputnik ایرانPersianPersianSputnik افغانستانDariDari
Central Asia
ҚазақстанҚазақ тіліKazakhКыргызстанКыргызчаKyrgyzOʻzbekistonЎзбекчаUzbekТоҷикистонТоҷикӣTajik
East & Southeast Asia
Việt NamTiếng ViệtVietnamese日本日本語Japanese中国中文Chinese
South America
BrasilPortuguêsPortuguese
NewsfeedBreaking
15:15 GMTKremlin: Putin Will Listen to Biden's Proposals on Ukraine 'With Great Interest'
15:15 GMTNYC to Use 'Preemptive Strike' Against Omicron With Vaccine Mandate for all Businesses, Mayor Says
15:08 GMT3,000 Security Officers Guard India's Mathura as Hindu Group Threatens to Install Idol in Mosque
14:59 GMTAmid Rumours of US Boycott of Beijing Olympics, How Could the Move Affect the Games?
14:52 GMTUK Policing Minister Not Surprised Over Reports of Drug Use in Parliament Building
14:45 GMTLabour Unions Protest in Brussels Against Low Wages, Expensive Electricity - Photos
14:26 GMTSpanish Court Rules Employee Can be Fired for Job Abandonment During Pandemic - Reports
14:18 GMTAnger and Shock After Intruders Vomit and Urinate at Site of Manchester Arena Bombing Memorial
14:15 GMTUS, UK, Canada Concerned by Tigrayans Arrested Without Charge in Ethiopia
14:07 GMTLionel Messi, Neymar or Himself: Kylian Mbappe Reveals Who's 'Boss' at Paris Saint-Germain
13:58 GMTFormer Indian Shia Leader Embraces Hinduism After 'Death Threats From Muslim Groups'
13:48 GMTMarine Le Pen Accuses EU of 'Playing Role of Firefighter-Pyromaniac' in Ukraine-Russia Tensions
13:47 GMT'Happy a Team Like Barcelona is Interested in Me', Says Salah Amid Liverpool Contract Impasse
13:30 GMTEarth is Getting Its Own Black Box That Will Tell What Caused Humanity's Demise
12:58 GMTChina Says Plots to Thwart Ties With Solomon Islands 'Doomed' as PM Survives No-Confidence Vote
12:53 GMTPutin in Meeting With Modi, Discusses Drug-Trafficking, Terrorism and Situation in Afghanistan
12:46 GMTSri Lanka Demands Compensation From Pakistan Over Brutal Mob Killing of Factory Manager
12:30 GMTPutin and Modi Hold Negotiations at 21st India-Russia Summit
12:27 GMTRDIF: Russia Ready to Provide India With One-Shot Sputnik Vaccine for Adolescents
12:26 GMTKamala Harris' Staffers Reportedly Describe Her as 'Soul-Destroying', 'Bully'