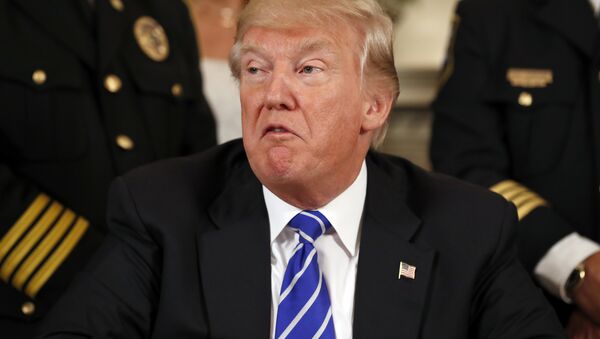 John Wight
All materials
Donald Trump's presidency has descended into farce. The undignified manner in which both he and his adversaries in Washington conduct themselves sits in sharp contrast to the dignity of those countries and governments demonized as enemies of everything the Rome of our time holds dear - namely untrammeled power, greed, and domination.

The latest country to be targeted by President Trump is Cuba, thus continuing with his agenda of dismantling his predecessor Barack Obama's legacy — whether his healthcare plan at home or rapprochement with Iran and Cuba abroad. Along with the p5+1 Iran nuclear deal, Obama's decision to normalize diplomatic relations with Havana is the only foreign policy achievement of which he can be proud, something that cannot be said of his drone war, his role in the destruction of Libya, or his administration's concerted attempt to destabilize Syria.

Though Cuba may be a tiny country of just 11.3 million people compared to its superpower neighbor located 90 miles to the north, in terms of its contribution to humanity, its status as a beacon of justice, solidarity, and dignity in the face of US aggression, it is a veritable giant. Whereas the US sends missiles and Marines to poor countries in order to kill their people, Cuba sends medicines and doctors to heal them. It marks the difference between the culture of death and a culture of life, between cultural values of oppression and domination and cultural values of solidarity and internationalism.

Let us be honest, for there is no other way to put it, Donald Trump is a clown. He is a billionaire with the wisdom of your average-sized plank of wood whose ability to get elected as the country's president is an indictment of a society in which anti-human values of fame, celebrity, and unfettered wealth reign. And as for those who seek to defend Trump on the basis that Hillary Clinton is worse, this is like defending typhus on the basis that cholera is worse — or vice versa. In other words, they are two sides of the same proverbial coin.

The way the President has sought to endear himself to Cuban exiles in Miami, allowing them to dictate his regressive stance on Cuba, speaks volumes about his notion of "leadership." It confirms there is no low he will not stoop to in order to appease the assorted reactionaries, hypocrites, and ultra right-wing ideologues who make up his base. Threats leveled against Iran and North Korea, illegal missile strikes against Syria, and now confrontation with Cuba, this is the sum total of a foreign policy that calls to mind the one embraced by Rome at the height of its empire.

During his speech declaiming against Obama's policy vis-a-vis Cuba, Trump said, "They [the Obama administration] made a deal with a government that spread violence and instability in the region and nothing they got, think about it, nothing they got, they fought for everything and we just didn't fight hard enough, but now, those days are over."

Trump’s Tough New Crackdown Policy on Cuba Marks ‘Great Leap Backwards’ for US
Reading those words is like being transported through the looking glass into a parallel world in which up is down and down is up. The only government that has "spread violence and instability in the region" is the US government, going all the way back to the infamous Monroe Doctrine of 1823, when the country's then president, James Monroe, laid claim to Latin and South America as Washington's backyard in relation to the European colonial powers. The region, ever since, has been scarred by an unbroken thread of proxy wars, the subversion of democratic governments, collusion in human rights abuses, including torture, and the wilful violation of international law whenever and wherever it has suited Washington's geostrategic and economic interests.

Cuba's crime in the eyes of Washington is not anything bad it has done or is doing, but the good, representing as it does a social and economic model that puts people before profits. It is a model responsible, since the Cuban revolution, for huge advances and achievements in healthcare, literacy, education, and biomedicine. The fact those achievements have been made in the face of a decades-long US economic and trade embargo, designed to bring Cuba to its knees, makes them all the more remarkable.

And while Cuba may not conform to the liberal democratic yardstick held up by Washington as the sine qua non of a country and society deemed worthy of respect, the pride with which the Cuban people regard their island's history of defiance against the empire to the north reduces Trump's verbal broadsides to the ranting of yet another US president drowning in ignorance, if not arrogance.

"With what moral authority can [the US] speak of human rights… the rulers of a nation in which the millionaire and beggar coexist; where the Indian is exterminated; the black man is discriminated against; the woman is prostituted; and the great masses of Chicanos, Puerto Ricans, and Latin Americans are scorned, exploited, and humiliated… Where the CIA organizes plans of global subversion and espionage, and the Pentagon creates neutron bombs capable of preserving material assets and wiping out human beings."