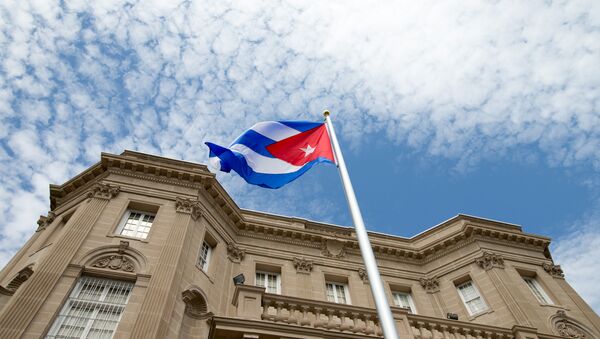 President Donald Trump’s reversal of his predecessor Barack Obama’s efforts to slowly develop economic and social ties with Cuba will anger several areas of support across the US south and marks a major retreat into failed past policies, analysts told Sputnik.

In a new clampdown on travel and trade to the Caribbean island nation, Trump scrapped previous president Barack Obama’s agreement with Cuba, he announced in a speech in Miami, Florida earlier on Friday.

However, Trump’s policy, which fulfilled a pledge he had repeatedly stated during his 2016 election campaign, was "Not good for the United States and not even good for President Trump’s own political prospects," Horne stated.

By cutting off hopes for increasing trade and investment with Cuba, Trump had damaged economic growth and recovery prospects across the south of the United States, which voted in his favor in the 2016 election, Horne observed.

Trump "has angered many of his potentially strongest supporters… Conservatives in the Deep South, especially in Louisiana are expressing anger Financial circles are upset. It will damage prospects of economic recovery and growth across the South," he said.

Trump’s decision will block the plans of major UWS hotel chains to invest heavily in Cuba and capitalize on what had been anticipated to be a new wave of US tourists hoping to visit the country, Horne noted.

"It will hamper the expansion of hotel chains, especially Starwood. Trump is blocking them," he said.

The new Trump administration policy toward Cuba appeared both ill-advised and poorly thought out, Horne commented.

"It is hard to understand the rationale behind many parts of Trump’s new policy as some of them appear to be self-contradictory. Rather than helping ordinary people in Cuba as he said the policy is intended to do, it will actually serve in many ways to strengthen the Cuban state," he said.

The new policy allowed the continuation of organized groups to visit Cuba and shut down the new opportunities for individuals to do so, Horne commented.

"But it is much easier for the Cuban authorities to monitor and exercise tight control over all visiting groups than to do so on individuals travelling and staying privately. Once again, Mr. Trump has shot himself in the foot," he concluded.

Independent Institute Center for Peace and Freedom Director Ivan Eland predicted that the Cuban people, not the Havana government would be the real victims of Trump’s new policy.

"The decades long embargo has just hurt the Cuban people, prevented ideas and technology to enter which may loosen the political system, and given the Cuban government a way to blame an external entity for the economic disaster that is socialism," Eland said.

The re-tightening of the embargo would hurt the Cuban economy through reducing US tourism there and would also lead to poorer relations with the Cuban government, Eland warned.

Treasury Sheds Light on Trump's Cuba Rollback Targeting Obama's Legacy... Again
Eland was also critical of the US president’s arguments that the clampdown was necessary because Cuba had an allegedly poor record on human rights. Eland recalled that Washington continued to maintain warm and close relations with countries like Saudi Arabia that had widely criticized records about most severe human rights violations.

"Trump claims the embargo should be tightened because Cuba is a human rights abuser but he regularly fawns over other similar autocratic countries, including sending sophisticated military equipment to Qatar and Saudi Arabia. Thus, the rationale of promoting human rights is mere rhetoric," he said.

The US government would be better advised to try and influence official Cuban policies through goodwill and mutual trust rather than increase fear sin Havana that Trump was plotting the overthrow of the island’s government, Eland recommended.

"Why not attempt to use sugar instead of vinegar to improve political and economic freedom there? Using vinegar has been a disaster for more than a half century; it is crazy to expect a different result when doing the same thing," he said.

Cuba posed "absolutely no military threat" to the United States so Trump could afford to be generous and cooperative in dealing with the country, Eland concluded.