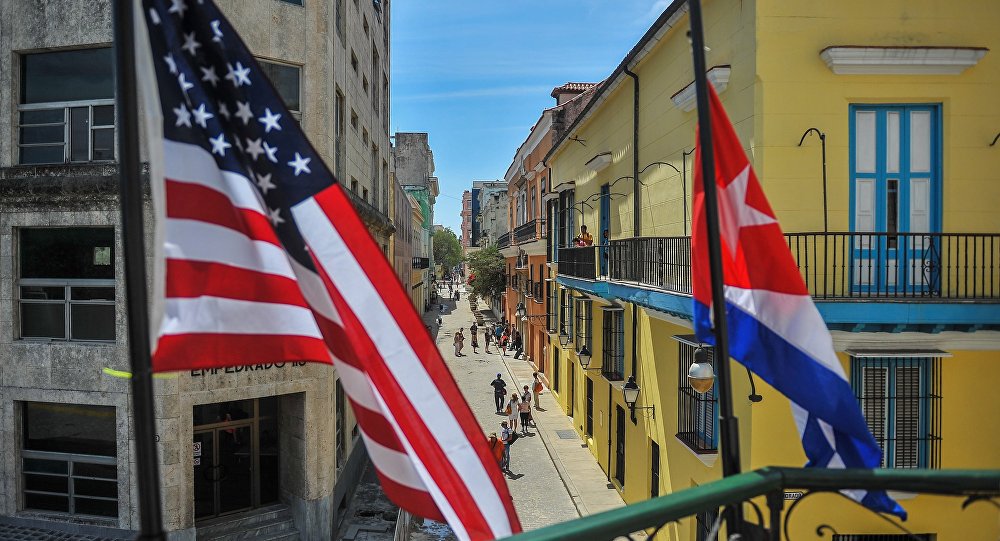 US President Donald Trump said Friday that the US will exit the agreement made by the previous administration to normalize relations with Cuba. Trump called it a "one-sided deal" and said his decision to back out of the commitment was "effective immediately."

“I am cancelling the last administration’s completely one-sided deal with Cuba,” the president told a crowd in Miami.

Part of the new posture includes a plan to "enforce the ban on tourism" and block US nationals from traveling to the Caribbean nation for cultural excursions, language lessons or just holidays. Most business transactions with Cuba will also be blocked, with exceptions made for air and sea travel.

The recently opened US embassy in the country, however, will remain open.

Trump renewed calls to the international community to step up sanctions against Cuba until “concrete” political and economic reforms are achieved on the island. In particular, the US “will not lift sanctions on the Cuban regime until all political prisoners are free, freedoms of assembly and expression are respected, all political parties are legalized, and free and international supervised elections are scheduled,” Trump said.

"Return the fugitives from American justice, including the return of the cop killer Joanne Chesimard," Trump demanded.

Ben Rhodes, the foreign policy advisor to former US President Barack Obama who is widely seen as the architect of Obama’s Cuba opening initiative, called it “tragic” that some people "are so determined to cling to a failed hardline on Cuba that they’re hitching themselves to Donald Trump.” Trump couldn’t “care less about Cubans,” Rhodes said via Twitter, adding “the few people in Miami enabling Trump in carrying out this charade should be embarrassed” and “held accountable.”

Trump adviser Kellyanne Conway made claims Rhodes quickly and emphatically debunked as doublespeak. “Our unity is with the Cuban people, not the oppressive regime,” Conway claimed on Fox and Friends. “97 percent of the Cuban people support normalization. Which Cuban people are you talking about? Have you met any?” Rhodes commented.

“The Cuban people overwhelming favor normalization. Anyone who actually goes to Cuba knows that they hate Trump’s approach.”

The US has long said its poor ties with Havana are due to the country’s communist history and apparent attendant rights violations, but China’s ruling Communist Party of China (CPC) has never deterred Washington from pursuing lucrative trade agreements with Beijing.