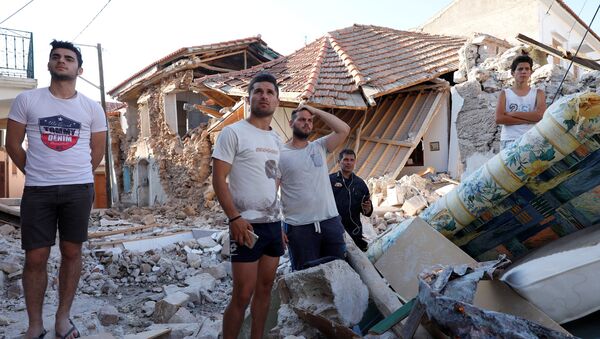 © REUTERS / Giorgos Moutafis
Subscribe
The Greek island of Lesbos, and the nearby Turkish coast, has been hit by an earthquake measuring 6.3. One woman died and many houses were destroyed.

There are fears the quake on Monday (June 12) could be the first of many tremors during the summer when the Aegean Sea region is full of tourists from the rest of Europe.

Greece and Turkey have suffered thousands of earthquakes over the centuries and sit on the edge of a number of tectonic plates.

The Aegean Sea sees a number of plates rubbing up against each other — the Eurasian plate contains both the Greek and Anatolian microplates, while the African plate is further south.

It is the friction between these two microplates that often causes quakes.

#VIDEO#Earthquake in #Lesbos island in Greece has felted All over Western Turkey. pic.twitter.com/eGXlqWvxPh

The epicenter of the quake was three miles south of Plomari, on the coast of Lesbos.

Several buildings were damaged in the village of Vrisa, where 10 people were taken to hospital.

The first quake was at 3.28 pm local time and was followed by two sizable aftershocks.

The Mayor of Vrisa said the town looked as if it had been "flattened by bombs."

"Yesterday's earthquake is known as an intraplate event. There is a crack in the crust of the Earth and there are a lot of stresses in that region. The African plate is pushing northwards, and has being doing so for 50 million years, and it causes stresses in the Eurasian plate and it can get released in weaknesses in that plate," Jennifer Weston, a seismologist with the International Seismological Center, told Sputnik.

She said there were thankfully only minimal casualties from the Lesbos quake because it took place in an area which is not densely populated.

But she said further east was the Anatolian fault, which runs close to Istanbul and several other cities.

She said the Lesbos earthquake measured 6.3 on the "moment magnitude," which measures how much energy is released.

The Richter scale is a better known scale but is nowadays used less by seismologists.

"The largest magnitude ever recorded was in Chile in 1960 and that was 9.5," she told Sputnik. The 1960 earthquake, near Valdivia in southern Chile, killed at least 1,000 people and left around two million homeless.

Magnitude 5.8 Earthquake Strikes Pacific Coast of Mexico – US Geological Survey
The International Seismological Center gathers data from earthquakes and tremors all around the world and produces a regular bulletin for scientists.

In May, an earthquake measuring 5.8 hit the Pacific coast of Mexico.

Many earthquakes hit uninhabited areas, but the San Andreas Fault in California runs through Los Angeles and several other areas of dense population.

Next year California will start rolling out an early warning system which they hope will tip the state off when the next major quake hits the state.