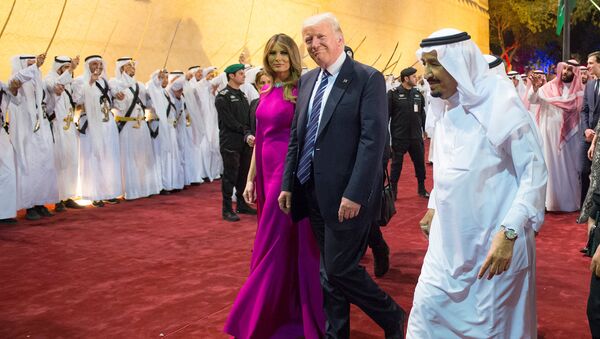 Trump effectively blessed Saudi Arabia as a pillar of moderate Islam as part of his “Muslim reset”.

Cash Over Conscience: What Made Trump Sign the Largest Arms Deal in US History
One Arab writer even hailed Saudi-US ties as one that “shaped the wider world” and although the wider world would undeniably agree with that reality, it would nevertheless consign such ties to the very negative end of the global affairs spectrum.

The Israeli press celebrated Trump’s royal treatment in Riyadh and observed how the president and select members of his cabinet danced with swords in a ceremony that must have nauseated the families of 9/11 victims.  Syrians, Yemenis and Christian minorities worldwide would have also watched that macabre spectacle with a foreboding sense of horror.

Just about every symbolism linking Saudi Arabia and Israel was explored and publicized by the latter’s media, including a historic “first direct flight” from Riyadh to Jerusalem – reflecting the correct order of priority, both domestic and foreign, facing any US presidency!

One wonders when these two Middle Eastern lovers would emerge from the closet to announce a union, albeit a temporary one, to jointly exercise “regional peace” under Washington’s patronage.

Saudi Arabia remains the prima inter pares of the Washington-Riyadh-Jerusalem triad. This was underscored by Israeli Prime Minister Benjamin Netanyahu who secretly begged Trump not to move the US embassy from Tel Aviv to Jerusalem. There are good monetary reasons for such shadow play. According to US investigative journalist Robert Parry, Saudi Araba provides billions of dollars for Israeli West Bank settlement construction in return for secret Israeli security cooperation.

Two primary issues currently preoccupy the triad. The first concerns the amount of wool needed to be pulled over the eyes of a historically corrupt Palestinian leadership as well as the Islamic world. This should nevertheless be a cinch sans any tectonic shocks to an admittedly fragile global system.

'Repeating the Likes of 9/11': Tehran Slams Trump on Shocking Saudi Shift
The second, far more vexatious issue concerns neutralizing Iran. While other major Middle Eastern oil producers have been devastated by post-9/11 invasions, regime changes and “civil wars” which render them prostrate before Saudi diktats, Iran continues to provide oil in significant quantities to an energy-hungry Asia. Without complete control over the Middle Eastern oil spigot, the triad cannot extract geopolitical concessions out of Asia which is rapidly weening itself away from fossil fuel dependency.

India is paving the way here. Sensing geo-economic insecurity on the horizon, it intends to become a “100 per cent electric vehicle nation” by 2030, backed by developments in its space program and a fast-growing native nuclear industry. The message is clear: Asia will not hedge its future on any Washington-brokered Middle Eastern “peace process” that is bound to fail.

Washington’s much-fantasized New World Order cannot be forged without neutralizing major oil producers such as Iran, Russia and Venezuela. Furthermore, any NWO requires a religious leap of faith. But how are the modern flag-bearers of three ancient, mutually-hostile religious ideologies going to resolve that?

China's Plan for New World Order: What Role Does It Leave to Russia?
Perhaps, the answer can be found in common apocalyptic undercurrents within the triad.

American evangelicals and “Messianic Christians” (who mimic Jewish forms of worship) had for the past five years eagerly awaited the destruction of Damascus as recorded in Isaiah 17:1. The cruelties perpetrated on Christian women and children from Damascus to Mosul did not trigger intercessory prayers from American evangelicals or their offspring worldwide. Instead, there was rapture-like rejoicing! The Christian teaching of repentance leading to vastly difference prophetic outcomes, including for Syria as recorded in Isaiah 19: 23-25, is routinely ignored by the Ayatollahs of the American religion.

One needs to study the heretical roots of American Christianity to realize why it hardly preaches or takes cognizance of the Ninth Commandment which reads “Thou Shall Not Bear False Witness”! Presenting false evidence annually at the United Nations to contravene other great commandments – namely Thou Shall Not Kill and Thou Shall Not Steal/Covet – never registers as “national sin” in the rabid evangelical psyche.

While Trump was hailed as Cyrus-incarnate by his Judas priests, Syrian President Bashar Assad’s Cyrus-like role in protecting his Christian minority went unacknowledged. Christians should revisit the following verse “I will bless those who bless you” (Genesis 12:3) and contemplate contemporary American reality. Instead of divine blessing, the US is reaping curse after national curse with its children plumbing new nadirs like trading sex for food.

The Assad government, facing a US-Saudi-facilitated international terrorist invasion from 90-odd nations, is being blessed with victory despite the triad’s efforts to reduce Syria into a pile of rubble. Russia, which has upheld Christian principles and precepts, remains remarkably resilient in the face of US-led Western sanctions. As a result, even Chechen leader Ramzan Kadyrov admits that Muslims fare better in Russia than anywhere else.

American evangelicals however frequently mistake “bloodletting” for “blessing.” Their cultic racket thrives as the religious arm of US foreign policy.

This resonates with the apocalyptic narrative of radical Islam; one where another Syrian landmark, namely the obscure town of Dabiq, plays a defining end-times role. Many (largely non-Arab) Islamists harbour hopes that a future Pakistani army may form the nucleus of a horde that will annihilate infidels from Khorasan to Jerusalem. The Muslim NATO being created by Saudi Arabia with US blessings has a Pakistani commander to underscore this popular doomsday narrative. Not surprisingly, the Saudis picked the Jewish firm of Burson-Marsteller to handle the public relations end of business.

Saudi-Led 'Arab NATO' 'Will Destabilize Mideast, Unleash Massive War in Region'
Israel remains the ultimate eschatological raison d'être of any Muslim NATO. It cannot annul the prophecies of Islam but it can placate the Saudis by continually attacking Syria. Israeli Housing and Construction Minister Yoav Galant, whose ministry is the suspected recipient of Saudi largesse, even went as far as advocating the assassination of Assad just before Trump’s visit to Riyadh.

Pressure to attack Iran – which has the economic backing of Russia, India and China – can be delayed indefinitely by raining gradual misery on Syria. In any case, the downfall of Iran means the automatic ascension of Israel as the primary bogeyman of global jihad. Maybe, the Israeli deep state is expecting help from Saudi clerics to stoke the diversionary fires of Ghazwa-e-Hind – an event now interpreted as an apocalyptic showdown between Pakistan and India, although it has no basis in established Muslim traditions. Can Israel get Pakistan on-board via a Saudi shadow play?

As long as Israel remains focused on playing up the Syrian and Iranian bogeyman, the Saudi-led bloc of “moderate Islam” may even grant some tactical, indirect imprimatur for the construction of the Third Temple for “all of humanity.” This scatter-brained hope is shared by a surprisingly motley lot, including Turkish sex cult guru Adnan Octar.

But what happens to the Al Aqsa Mosque and the Dome of Rock which currently stand in the way? As soon as they are razed or when the first Temple brick is laid down, “moderate” Arabs will revoke all prior tacit acquiescence. Perhaps, this is when the United States steps in to execute the greatest betrayal in modern history…

By Mathew Maavak, a geopolitical observer and writer residing in Malaysia