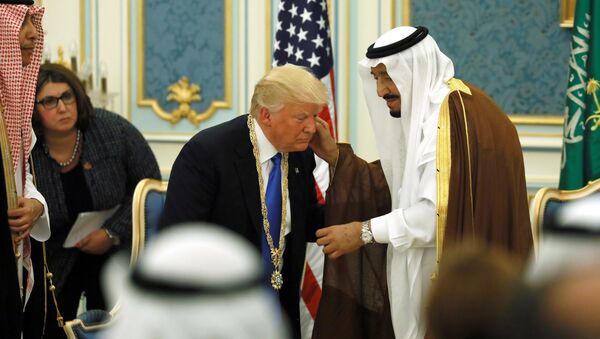 President Trump, a vocal critic of Saudi Arabia, a nation he's previously condemned for treating women like "slaves" and wanting to "kill gays" and accused of extremism, has now signed the "largest arms deal in US history" with Riyadh. Russian experts explain what made the US leader change his views.

Riyadh: Trump Will Overturn Law Allowing 9/11 Lawsuits Against Saudi Arabia
President Trump is on his first foreign trip in office to the country he's previously condemned for treating women like "slaves" and wanting to "kill gays."

"Saudi Arabia and many of the countries that gave vast amounts of money to the Clinton Foundation want women as slaves and to kill gays. Hillary must return all money from such countries!" Trump's Facebook post read in June, 2016.

During a presidential debate Trump also said Saudis were “people that push gays off buildings” and “kill women and treat women horribly."  He has also claimed the Saudi government had ties to the September 11, 2001 terror attacks and accused the country of extremism.

​However, according to a statement just issued by the White House, the US leader "has just completed largest single arms deal in US history, negotiating a package totaling more than $109.7 billion" with this particular country, which will "boost Saudi Arabia's defense capabilities, bolstering equipment and services in the face of extreme terrorist groups and Iran."  The White House added that the deal will create defense jobs while also reaffirming America's commitment to Saudi Arabia.

Going Big: Riyadh, Washington Sign Agreements Worth $280Bln
Stanislav Byshok, a political analyst at the CIS-Europe Monitoring Organization think tank does not consider the actions of the US president inconsistent or illogical.

"Trump's policy is based on the following: with all his skepticism towards Saudi Arabia, he, as a businessman and a politician who promised to develop the US' military and industrial complex, is lobbying and pushing the deals on the sales of the US arms. However Trump is a realist. He understands that the Saudis will continue pursuing their interests in the region, in Yemen and in Syria," he told Russia's RT news channel.

The political analyst also noted that the Syrian factor is playing a vital role in this deal.

"Current agreement came as the result of a certain discontent of a number of influential US politicians with Trump's softness towards Syria. So now his support for the state which openly acts against President Assad should appease the critical establishment," Byshok suggested.

His view is echoed by Vladimir Bruter, an expert at the International Institute of Humanities, Social and Political Studies, who also said that Trump's deal comes as no surprise. First of all, arms supplies to the Saudis are very profitable to the US, Secondly, Saudi Arabia is the key ally of the US in the region.

"From these points of view, any restrictions on the deals between the US and Riyadh will cause certain damage to Washington.  And this is what exactly worries the US. The fact that their arms may end up with some Islamist group is not of any particular concern to the US," he told RT.

In a separate comment on the deal, Robert Kaufman, a professor at the Pepperdine University School of Public Policy and author of “Dangerous Doctrine: How Obama’s Grand Strategy Weakened America” told Radio Sputnik that Trump has identified Iran as the "greatest threat" to the region. Thus, he suggested that Trump is "sending a message of inclusion and tolerance encompassing three great religions." And his trip is aimed to underscore that and not just internationally but to the American domestic audience as well.

"This trip is to reassure his allies and the world that he is not intolerant," he told Sputnik.