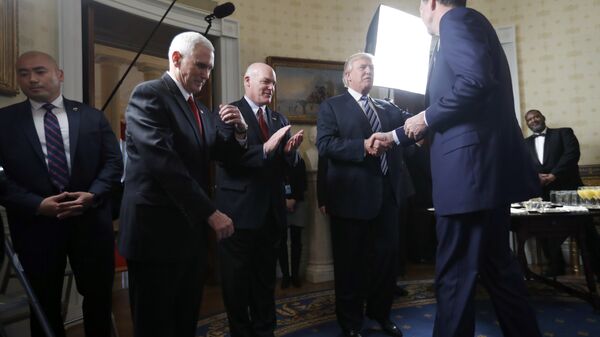 The New York Times reported that Comey authored a memo on the exchange after the February meeting. An anonymous associate of Comey’s “read parts of the memo to a Times reporter.”

Following the Times report, an anonymous source confirmed the memo’s existence to AP and that Comey had written that Trump asked him to end the investigation.

The Times report was “not a truthful or accurate portrayal of the conversation between the President and Mr. Comey,” the White House said in a statement to reporters.

Flynn was ousted for misleading Vice President Mike Pence about the nature of a conversation Flynn had with Russian Ambassador to the US Sergey Kislyak. Comey allegedly wrote the memo and others as “part of a paper trail Mr. Comey created documenting what he perceived as the president’s improper efforts to influence a continuing investigation,” per Times reporter Michael Schmidt.

Comey confirmed to the Senate in March that the FBI was indeed in the midst of an active investigation into ties between Trump and Russia, and gave no indication in subsequent Senate testimony on May 3 that he felt pressured by the president or that he had observed attempts to obstruct those probes.

On Tuesday morning, Trump announced via his favorite social media platform, Twitter, that he has been probing individuals, including Comey and his peers, since January 20, “to find the LEAKERS in the intelligence community…..”

Following Comey’s removal from office on May 9, Trump tweeted, “James Comey better hope that there are no ‘tapes’ of our conversations before he starts leaking to the press.” This was immediately questioned as a potential constitutional violation, specifically witness intimidation.

Now it appears those “tapes,” which the White House has repeatedly said it has no comment on, would come in handy in proving one side or the other’s version of the story.

On Monday, the Washington Post issued a bombshell report that Trump disclosed classified information to Moscow that risked breaching the cover of US intelligence assets in the Middle East. The report was denied by Secretary of State Rex Tillerson, National Security Adviser HR McMaster and Deputy National Security Adviser Dina Powell. Moscow also denied the claims. McMaster, who was present at the meeting with Trump, Kislyak and Russian Foreign Minister Sergey Lavrov, said intelligence methods were discussed "at no time."