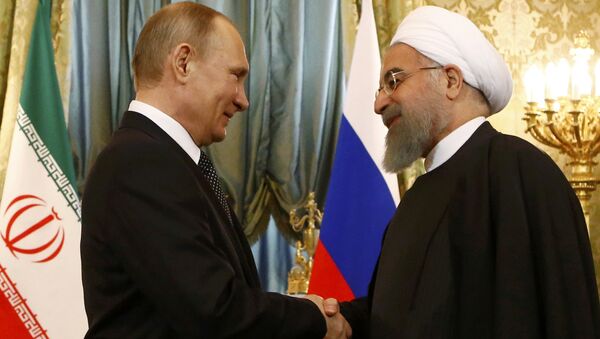 © REUTERS / Sergei Karpukhin
Subscribe
The US Defense Intelligence Agency director said that Russia and Iran will become rivals in the Middle East.

WASHINGTON (Sputnik) — Iran and Russia may engage in competition with respect to controlling parts of the Middle East, particularly Syria, US Defense Intelligence Agency (DIA) Director Vincent Stewart stated said in a congressional hearing on global threats on Thursday.

"Clearly, Iran views themselves as the dominant regional power [in Syria]," Steward told the US Senate Intelligence Committee. "They will be in competition at some point with Russia."

Stewart claimed Russia views itself as the dominant regional power in Syria, but expressed doubts Russian and Iranian interests will remain aligned in the long run.

Russia, Iran Reach Deal on Visa-Free Travel for Tourist Groups
On May 4, Russia, Iran as well as Turkey, the guarantors of Syria's nationwide ceasefire, agreed to create four de-escalation zones in Syria's Idlib province and parts of the neighboring provinces (Latakia, Hama and Aleppo), certain parts in the north of Homs province, Eastern Ghouta, certain parts in the country's south (Daraa and Quneitra provinces).

The memorandum on de-escalation zones took effect on May 6.

Russia's deputy defense minister said on May 5 that the implementation of the memorandum on de-escalation zones would put an end to the civil war.

Moscow and Tehran have been actively developing bilateral ties in various fields.