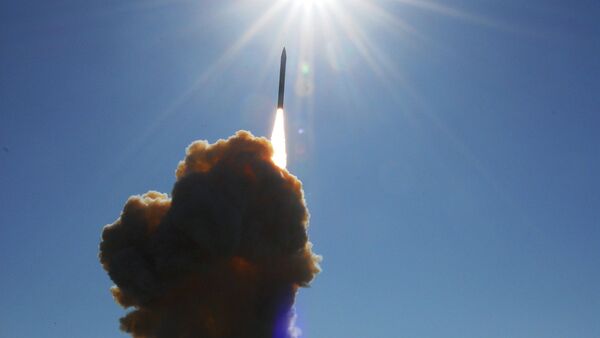 A former Pentagon missile expert has criticized the effectiveness of the US’s Intercontinental Ballistic Missile defense architecture, suggesting that the grid is unreliable at best in its capability to stop a missile attack.

With the Korean Peninsula devolving into a nightmare of tension and saber-rattling, many are contemplating a scenario that has felt distant since the Cold War: a nuclear conflict. Although North Korea currently lacks the technical capability to strike the US mainland with their arsenal, military leaders agree that it's only a matter of time before they accomplish that end.

So say a North Korean ICBM is launched at the United States. In this case, the Ground-Based Midcourse Defense (GMD), an anti-ballistic missile system that attempts to shoot down the ICBM while it's still in space, would activate. The US has two GMD systems: at Vandenberg Air Force Base in California and at Fort Greely in Alaska

The only problem with this system is that its success rate during missile tests has been somewhat lacking. Of the 17 intercept tests conducted since 1999, only nine were successful. Three of the four tests since 2010 were failures: a less-than-promising result.

"The failure in flight-intercept tests is all the more surprising, because these tests are highly scripted to achieve success. If these tests were planned to fool US defenses, as a real enemy would do, the failure rate would be even worse," said Center for Arms Control and Non-Proliferation senior science advisor Philip E. Coyle III. Coyle, a former director of operational tests and evaluation with the DoD, is a renowned expert on ballistic missiles.

The military also "counts one of those failures a success if the interceptor hit the target with a glancing [blow] but did not destroy it," Coyle said, speaking to Live Science. "Close only counts in horseshoes and not in nuclear war."

Coyle claims that the system's weakness is a result of rushed engineering in the Bush years to get the system operational. The system lacks effective radar or satellite support, for instance.

But even with improvements, it may not be enough to build a truly reliable nuclear defense. With only 15 minutes between launch and arrival, ICBMs are extremely difficult to intercept. During World War II, Allied efforts to counter the first true ballistic missile, the V-2, were unsuccessful, and the Nazi weapon was found to be virtually impossible to shoot down. Since then, missile defense systems have come and gone, such as the Nike Zeus in the 1960s and the "Star Wars" Strategic Defense Initiative in the 80s. None of them proved to be particularly effective shields.

"This is the hardest thing the Pentagon has ever tried to do, as our nearly 70 years of trying shows," says Coyle.

A ballistic missile's flight can be divided into three sections: launch, travel through space and re-entry. Destroying the missile after launch is typically unfeasible, as it would require an amazingly quick reaction from the defender to strike a missile base deep within enemy territory.

Destroying it right after reentry is very difficult, too: again, it's a short window of time and requires a level of precision that is almost impossible to achieve. In addition, even if the missile is detonated in mid-air, it could still cause severe damage on the ground.

This only leaves intercepting the missile in space, which virtually every missile defense system tries to do. But "the incoming missile is going 15,000, 17,000 miles an hour. And going that fast, if you miss by an inch, you can miss by a mile," according to Coyle.

In addition, ballistic missiles are typically not one projectile but several: either the missile splits into numerous warheads shortly after launch or it launches alongside dozens of decoy balloons to make it difficult to determine which is the real missile.