'Anti-Iran Propaganda Rhetoric From Washington Not to Die Anytime Soon' 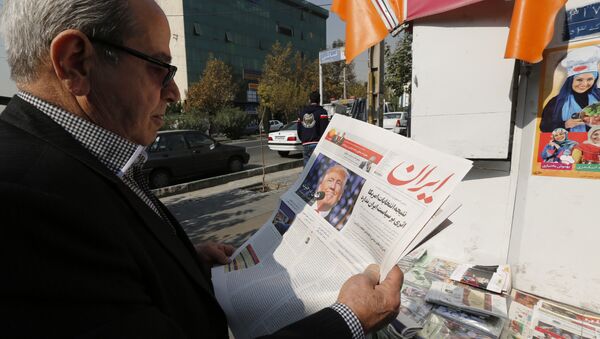 © AFP 2023 / ATTA KENARE
Subscribe
International
India
Africa
Donald Trump’s administration is stepping up its anti-Iran policy. This is evidenced by the recent statements stated by Trump himself, Secretary of State Rex Tillerson and other high-ranking officials. Sputnik spoke to political analyst, Vladimir Sazhin, about how far the US would go in its anti-Iran policy.

Syria, Afghanistan and Now Iran? Why Trump's Policies Lack 'Strategic Approach'
“The first and main complaint of the new US administration was not to Iran, but to the previous administration of Barack Obama, in regard to the nuclear deal. President Trump, who is quite hostile to Obama, could not recognize the merit of his predecessor, including the achievements of a historic agreement on the Iranian nuclear program,” Sazhin said.

The agreement, which was reached by five permanent members of the UN Security Council, Germany and Iran, was called the Joint Comprehensive Plan of Action (JCPOA). It has faced backlash from the new US administration.

Tillerson recently said that the agreement only delayed the transformation of Iran into a nuclear state.

“The Trump administration, unlike the Obama team, is in full solidarity with Israel in this case,” Sazhin said.

The question arises: Can Washington withdraw from this nuclear agreement?

Kazem Sajjadpour, president of the Iranian Institute for Political and International Studies, told Sputnik that Washington has little say in the matter.

“JCPOA is an international deal, concluded within the framework of international law with the participation of the UN Security Council. The multilaterally agreed framework of this transaction is not so easy to review and it is impossible to change the essence of the agreement,” Sajjadpour said.

World
'Specifically Designed to Provoke'? Trump's 'Outrageous' Iran Move May Backfire
However, what Trump can do is slow down the process of its implementation. Furthermore, the anti-Iranian propaganda rhetoric from Washington will not die down any time soon either.

“Trump has other reasons to accuse Tehran and one such reason is the Iranian missile program,” the analyst said.

After the conclusion of the nuclear agreement and adoption of UN Security Council Resolution 2231, the Iranian missile tests became a reason for accusations at the hands of the US.

“It should be noted that in spite of the fact that the Iranian missile program does not violate international legal norms, the buildup of missile potential in such a volatile region as the Middle East does not contribute to regional and global stability,” Sajjadpour said.

He added that another factor which can serve as a reason for accusations against Iran is the country’s support of groups such as Hezbollah and Hamas, which have been labeled as terrorist organizations by many countries.

Furthermore, Washington can use the human rights issues in Iran as an excuse for introducing sanctions against it.

“Naturally, the understanding of human rights in Europe and America differs from their interpretation in the Muslim world. However, the death penalty in Iran faces a lot of criticism from the international community. Iran ranks second in the world after China in terms of the number of death sentences,” Sajjadpour said.

Lack of Transparency in Saudi Arabia Complicates Human Rights Reporting
Such laws give rise to human rights fighters inside Iran to raise their voice in defense of humanitarian rights and foreign critics use the human rights situation in the country to impose sanctions.

“Objectively speaking, freedom and human rights in Iran [within the framework of Shiite laws] are incomparably broader than in Saudi Arabia and other monarchies and not only in the monarchies but also in people's democratic republics like North Korea,” the analyst said.

Sajjadpour said that even now the US is allying itself with countries such as Saudi Arabia and Israel in order to tackle the Iranian rise to a global platform.

“Despite a noticeable move away from Tehran, in all likelihood, the White House has not yet fully and clearly formed a concrete policy towards Iran. However, the fact that it will be a tough anti-Iranian policy, perhaps with the introduction of new sanctions is not doubtful,” the analyst concluded.

Meanwhile, Tehran maintains a peaceful manner and has not resorted to aggressive rhetoric. The Iranian Foreign Minister, Javad Zarif, described the recent statements by the US as “repetitive and useless rhetoric” and an elaborate anti-Iranian policy based on Iranophobia and a misunderstanding of the current state of affairs of the region.