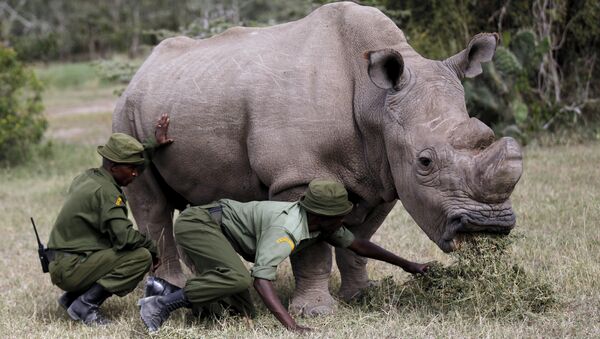 © REUTERS / Thomas Mukoya
Subscribe
Sudan's Tinder profile has him down as a mammal who likes the great outdoors and loves to travel. However there is one other thing that makes this profile different from the rest, Sudan is a northern rhino who lives in Kenya and desperately needs to find a mate.

Conservationists are hoping that Sudan's Tinder profile will help to raise money for his US$9 million fertility treatment, as attempts at getting him to mate naturally have failed. Sudan is the world's last male white northern rhino.

"I don't mean to be too forward, but the fate of my species literally depends on me, I perform well under pressure. I like to eat grass and chill in the mud. No problems. 6ft tall and 5,000 pounds if it matters."

Scientists plan to use Sudan's sperm to fertilize an egg from one of the other last two northern white female rhinos. One is a 17-year-old named Satu and the other is 27-year-old Najin.

The embryo will be implanted in a surrogate southern white rhino, a far more common species.

Sudan, the last male northern white rhino in the world, is finally on Tinder. pic.twitter.com/I2BusDWHwE

​Elodie Sampere, the marketing manager at Kenya's Ol Pejeta Conservancy where Sudan lives, said they tried everything to get them to mate and currently the task is so precious that all three white rhinos are being accompanied by 24-hour armed guards.

"When he first tried to mount the girl, the rangers guided him… but it is difficult with a rhino," Sampere said.

"We removed them from a zoo environment, which was not conducive to natural instincts, and put them in a semi-wild environment. There were a couple of matings, but it never resulted in a pregnancy," Sampere added.

We're teaming up with @tinder and @Ogilvy to raise funds for Assisted Reproductive Techniques that may save the northern white rhinos. pic.twitter.com/XkjW1kwvkF

White rhinos are hunted by poachers for their horns, which can be sold for up to US$50,000 per kilo. This makes them more valuable than gold or cocaine and his keepers fear that Sudan, who at 43 is old for a rhino, may die or be killed before he has any offspring.