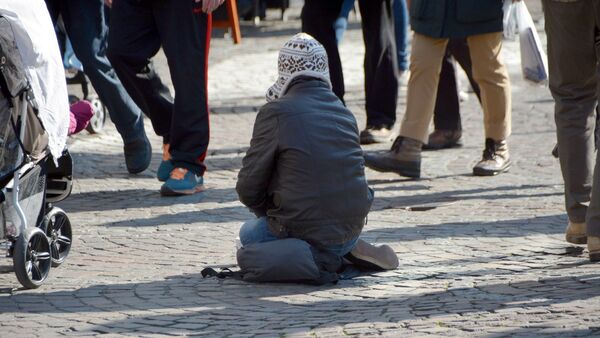 CC0 / Pixabay /
Subscribe
Beggars have been reported fleeing Norway citing safety issues after a revealing documentary, aired by the national broadcasting company NRK, exposed the seamy side of Norwegian society and linked beggary to organized crime.

On the Mooch: Copenhagen Struggles With Roma Beggars
The NRK documentary dubbed Lykkelandet ("The Land of Happiness") was filmed over two years and revealed numerous schemes, in which beggars were used as a cover for organized crime. The film, which featured footage from hidden cameras in premises connected to the Romanian begging community. In the film, a 140-strong network was found pulling the strings behind the black market for prostitution and begging in Norway.

The film, which mapped out beggars in Norway showed, among other things, women involved in begging at daytime, and prostitution and bank card theft at night, resulting in 100 million NOK ($12mln) being sent from Norway to Romania, stirring a significant debate in the Nordic country.

In the aftermath of the film, Norwegian Prime Minister Erna Solberg said that Norwegians should think twice before giving money to beggars, highlighting the dangers of indirectly sponsoring organized crime.

"Perhaps people should think about whether they are supporting organized crime or an individual person in a difficult situation," Erna Solberg told NRK.

Violent Islamism 'Likely' to Sweep Through Norway, Europe due to Poverty, Crime
Following the documentary, a number of beggars from Bergen's Roma community claimed to have noticed an overnight change of atmosphere. At least 11 people bought flight tickets back to Romania using support from the local shelter called Robin Hood-huset, which provides support for all the vulnerable people in the city, the local newspaper Bergens Tidende reported. Robin Hood-huset manager Marcos Amano told the newspaper that many of the inmates reported being threatened, subjected to physical violence and spat upon.

"Several people said today that they have been yelled at, told to go home or subjected to other aggressive behavior. One said he was kicked and hit today when he was collecting bottles. Another said that someone tried to kick him last night and that he was called a ‘dog' when he was sitting in the street," Marcos Amano said.

Swedish Greens Hit Rock Bottom After Reversing Position on Illegal Immigrants
According to Eurojust police attorney and public prosecutor Rudolf Christoffersen, there are several reasons why Norway and Scandinavia as a whole is a magnet for organized networks and traffickers.

"In the Nordic countries, it is not forbidden to beg, which makes them a desired destination. At the same time, we are a people who generally have a lot of money and are known for a strong desire to help out people in trouble. So the threshold for giving alms is probably much lower in the Nordic countries than in other European countries," Rudolf Christoffersen told NRK, venturing that Nordics' naivety is often abused. "Human traffickers and criminals know our desire to do something good and therefore they play on those feelings," he said.

Begging was illegal in Norway until 2005, when a ban on the activity was lifted. Erna Solberg's ruling Conservative Party supports reintroducing the ban, provided it gets parliamentary support. After the film, which was aired earlier this week, few beggars were seen on Norwegian street