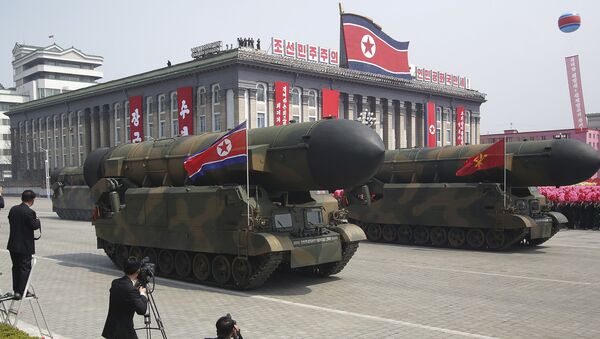 As parties continue to beat the drums of war in the Korean Peninsula, defense officials from Seoul, Tokyo, and Washington will convene in Japan on Wednesday to hold the Defense Trilateral Talks (DTT).

The meetings will bring US President Donald Trump’s administration together with Asian officials for the first time since Vice President Mike Pence said “the era of strategic patience” with North Korea "is over."

The South Korean Ministry of Defense announced the meetings on Monday as saber-rattling continues over Pyongyang, which views war games by Seoul and Washington as a dress rehearsal to invade the North. The discussions will entail “various ways of cooperation” between the three military allies, South Korea’s Yonhap News reported Monday.

Currently in Seoul to meet with acting South Korean President Hwang Kyo-ahn, US Vice President Pence is slated to visit Tokyo, Jakarta and Sydney on a tour through the Western Pacific. In addition to the military delegation, the US has relocated two more aircraft carriers to join the USS Carl Vinson and the US Navy’s First Carrier Strike Group.

The carriers, the USS Ronald Reagan and USS Nimitz, will make their way into the Sea of Japan by next week, Sputnik reported Monday.

From Beijing’s perspective, even though nuclear chaos was not unleashed over the weekend, the Korean Peninsula remains "highly sensitive" and poses "high risk" to regional and possibly global security, Chinese Foreign Ministry spokesman Lu Kang said on Monday. Any "provocative" action could "pour oil on the fire," Lu said.

At the DTT, officials may discuss the results of recent drills held in preparation for the threat of North Korea launching a nuclear projectile. On April 13, Sputnik noted that Japan was sending its helicopters to the USS Carl Vinson to practice landing and communication drills. On Sunday, US National Security Adviser H.R. McMaster said Washington was exploring all options "to try to resolve this peacefully," referring to hostilities near North Korea.

Russian Foreign Minister Sergei Lavrov noted that North Korea’s "reckless nuclear and missile actions' are unacceptable and violated international law, but that Washington should refrain from unilateral actions "in the same way by using force," referencing Pence’s hawkish comment that the US might strike pre-emptively instead of playing the waiting game, Sputnik reported Monday.