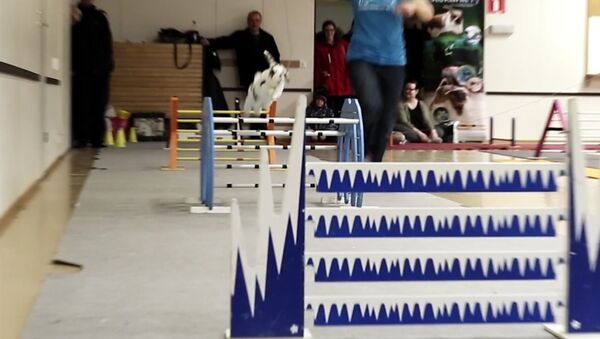 For those who enjoy equestrianism, but are somewhat short on funds, rabbit jumping is a welcome alternative. The popular sport, which originated in Sweden, is beginning to sweep Scandinavia.

Yee-Haw! Stick-Horse Equestrianism Becomes Popular Finnish Fad
Rabbit jumping has become a serious sport in Sweden and elsewhere in Scandinavia. It gives bunny-owners an opportunity to develop a bond with their pets, who utilize their natural propensity for hopping. Over several decades, this activity has evolved; its rules were initially based on horse jumping, but were later reformed to better suit rabbits. All breeds are allowed to compete; however, smaller breeds (under two kilograms) might have problems jumping over long obstacles due to their diminutive size.

There are four events in rabbit jumping: straight run, bumpy track, high jump and long jump. In straight run and bumpy track, the goal is to complete the run fastest, with as few penalties as possible. The rabbit wears a harness, with its owner walking next to it during the performance. In high jump and long jump, world records stand at 105 centimeters and 300 centimeters accordingly.

The past week-end, a Finnish national championship in rabbit jumping was held in the town of Halikko in southern Finland. Participants are divided into four different leagues, from rookie to elite, the Finnish daily Hufvudstadsbladet reported.

Swap Meat: Swedes Ponder Tax on Flesh-Eaters to Help Environment
According to rabbit-owner Henna Vihersaari, the training of rabbit is in many respects similar to the competition.

"You can, for example, put two or three hurdles one after the other and let the bunny familiarize himself with them in peace. The rabbits are often quite eager animals, and sometimes they hop over obstacles right away. Others, however, tend to lure their rabbits with tasty morsels," Henna Vihersaari said.

According to Vihersaari, rabbit jumping is still a fledgling branch in Finland. The Finnish Rabbit Jumpers Association, which was founded in 2004, has about 80 members, which is not at all bad for a niche sport. At present, its activities are mainly concentrated in southern Finland; however, some enthusiasts exist even in Ostrobothnia and the Åland archipelago.

BUNNY SHOW JUMPING 🐰 I just squealed a pitch so high, only dogs can hear me. #kaninhoppning pic.twitter.com/5QtGzOSHtk

​Bunny hopping originated in Sweden in the 1970s, and the Swedish Finnish Rabbit Jumpers Association numbers some 700 members. A similar organization was established in the early 2000s in Norway. In the 2010s, bunny hopping mushroomed in popularity, and was introduced to the US, Australia and New Zealand.